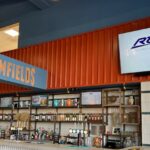 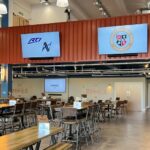 Sports and AV technology go hand in hand. Fans want to be thoroughly entertained in and out of their seats, and the high-quality audiovisual experience they often find at home increases expectations for stadium TV. For Simon Howes, AV Inspire director, it was his customer’s great RTI home entertainment and control experience that led AV Inspire to completing a commercial project for him as well: the Bromley Football Club (F.C.).

The owners wanted to outfit the Bromley F.C.’s new sports bar, Broomfields, as well as a training room, with 4K flatscreen displays that could receive a host of IP-distributed content, from live match feeds to cable channels to digital signage. There was just one setback: Howes was invited mid-development of the project. The displays were already set to be installed and cabling had already been pulled — one Cat-6 cable to each display location.

“I was limited in what I could do and how I could control it,” says Howes. He needed a video distribution system that could be installed quickly with minimal infrastructure. It also needed to support 4K and be easily controlled. As Howes puts it, he was thrown into the deep end to make things work.

Howes then reached out to his trusted distributor, Invision UK who recommended the RTI Video-over-IP platform. It allows integrators to distribute 4K UHD video over a 1GB network switch with ease. This flexible system’s installation takes only minutes, scaled to a virtually unlimited number of endpoints. Moreover, users can control it natively within the RTI control environment. After a few short video tutorials on the RTI website, Howes felt ready to proceed.

“Although I had never deployed a video-over-IP solution before, I’ve been installing RTI control systems for 15 years,” remarks Howes. “I trusted Invision’s advice and was extremely confident in RTI.”

The platform takes advantage of the existing network infrastructure to cost-effectively distribute crystal-clear video to displays across installations of any size. Its design helps integrators deliver the benefits of video-over-IP without needing a deep understanding of networking or manually assigning IP addresses.

At the heart of the RTI Video-over-IP platform is the VIP-UHD-CTRL Control Module. Users can program this using the RTI Integration Designer platform to integrate with IR, RS-232, or TCP/IP control, and a wizard-based interface for fast and automated system configuration.

For the user, the video-over-IP system conveniently displays everything on an RTI touchpanel, remote or a mobile app. In this case, Bromley FC didn’t want multiple controllers. Thus, it chose to use RTI’s completely customizable iPad app. Using one of three iPad Airs that reside in the main office and at each of the indoor and outdoor bars, the staff can see a video preview. This makes it easy to align any source with any display and control each display via IP.

As the project came together and revealed the benefits of the Video-over-IP solution with RTI’s intuitive control; the owner decided to expand the system to an outdoor bar. Here, they added three more displays. Howes thus installed three more receivers and a Luxul PoE+ network switch at a remote location to create a fiber link to the main system.

Howes notes the client’s enthusiastic reaction to the platform. He then adds, “With RTI Video-over-IP, it came together quickly and beautifully.”

“The outdoor area wasn’t even on the map. It almost feels like the owner looked around at the various spaces within the facility to see where he could add more,” remarks Peter Alloway, head of UK business development, UK, Invision.

Click on “View Slideshow” on upper-right corner to view images of the installation.