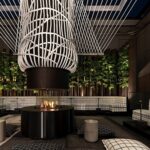 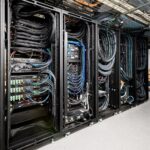 “The Londoner,’’ a boutique hotel built in the heart of Leicester Square, is a truly impressive property composed of 16 meticulously curated floors. Representing an investment of approximately £500 million, the property showcases the contemporary design of U.S. designer Yabu Pushelberg. It’s a truly unique hotel, boasting the deepest commercial basement in the world. It’s also built around art that is not only displayed inside the hotel but also on the building.

The hotel also invested heavily into technology including the audiovisual side which covers all 16 floors. The AV network within this new hotel comprises over 40,000 meters of AV/IP cabling, over 300 Bose professional speakers, and a state-of-the-art ballroom installed with every possible AV requirement and hardware required to manage all events. These include inhouse virtual and hybrid events, nine future-proofed meeting rooms with VC and building wide music system for BGM, live music and DJ sets.

U.K.-based Visual Systems, part of the Myriad Audio Visual Group, says it received the project as it took The Londoner’s environmental concerns into consideration.

According to the integration company, it has served as the approved supplier to the group for a number of years. However, it still had to go through the process of tendering for this project as the customer contracted an external team to manage and run the project. As a result, the team was one of five integrators bidding for this project.

The Londoner’s team went through an extensive vetting process and eventually awarded the contract to Visual Systems. Nick Kalsi, Edwardian technology consultant, remarks, “I worked closely with Visual Systems on this project and am so pleased with the design and installation carried out, Visual Systems have done a great job in provided us with systems that are not only user friendly but easy to maintain and future proof, this has been a very difficult and long project for all due to COVID-19 but we have come out of it stronger with a product to be proud of, the ballroom is unique in that we have every item you may require for a high end event including a spectacular Martin Lighting system which just takes this area to another level.’’

The hotel’s scale includes 350 bedrooms, restaurants and lounges, rooftop bar, underground spa and swimming pool, two screening rooms as well as the star attraction of the venue: a 680-seater ballroom with an AV system including lighting and projection for any size of event or award dinner. The hotel wanted a state-of-the-art facility, with a discreet, blending AV system.

Thus, Visual Systems designed and installed a background music system which feeds all areas of the hotel from a central point to distribute music to all public areas, lift lobbies etc. The speakers are also color matched so they do not stand out and blend seamlessly into the hotel’s surroundings.

The integrators chose AMX to control all system functions throughout the hotel and video-over-IP routing via AMX SVSI N2400 AV-over-IP units. The VLANs were setup to segregate or incorporate different areas through the AMX control system software.

Visual Systems also supplied and installed Bose speakers and hardware for The Londoner. Thus, the system consists of more than 300 Bose professional loudspeakers and arrays throughout the venue, color matched to the hotel’s ceilings and surroundings to ensure a discreet look. The team also installed outside broadcast patch panels in the loading bay for external TV crews to link into the hotel AV system and network.

Speaking of installation challenges, the pandemic was no doubt the biggest factor. Despite this, the project didn’t stop. The team says it had supply chain issues with equipment which was a major element that delayed the project.

The other major issue was that it only had a performance specification. Thus, the team not only designed the AV side but also the cable containment, data, the power requirements and the infrastructure required. This emerged as a key component of the project so that everything else could flow in after. The project was originally a 12-month install period but this expanded to just over two years.

The team also had to work very closely with the client’s project team and various contractors onsite as they designed the containment, data and power requirements on top of the AV side. This required a lot of interaction with the various teams on site to ensure that requirements were supplied and installed correctly during the build period.

So far, the feedback has been that of amazement of not only the technology installed but of the interior design. The hotel also notes that the AV design compliments the interior design. Visual Systems adds that it deployed Bose EdgeMax speakers to cut down the number of speaker units required to cover an area.

Furthermore, the EdgeMax speaker technology allows the speakers to be installed on the edge of the ceiling thus leaving the center clear. The hotel reveals that it has held a large number of high-profile events in London such as Bafta, Vogue, fashion shows etc. Customers also love the meeting rooms and ballroom as the systems offer high-quality of equipment with minimal intervention by hotel staff.

Iype Abraham, commercial development director Edwardian Hotels, states, “This project for the group was a vast investment and one of the largest developments in the area, we as a group have internal design teams to ensure we are at the forefront of Hospitality as such we also invest into the latest technology which covers all areas such as AVL, security, access systems etc.…We evaluated various suppliers and selected Visual Systems to be our partners on this journey, they understood our requirements and objectives for this hotel to be the first and best in its class. I believe we have achieved and gone beyond our initial specification, the installed systems are fantastic with a world class ballroom for any type of event or live performance.’’

Click on “View Slideshow” on upper-right corner for images of the installation by Visual Systems for The Londoner.