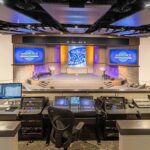 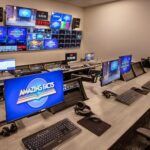 Amazing Facts worldwide ministry is certainly not akin to the house of worship you might have gone to as a child. Indeed, the ministry, which is headquartered in the Granite Bay area outside Sacramento, Calif., is made up of a sprawling campus that includes a local church, radio studio, television studio and a publishing house. Its recent growth necessitated the remodeling of the administration building and construction of a sanctuary with full broadcast studio.

The new broadcast system includes a 12G TV studio, complete with 5-4K studio camera rigs, studio lighting, video and audio switching, and an audio editing suite. A fiber network was used to tie all buildings and systems together on one high-speed platform.

The project started with the church’s planned expansion in the Granite Bay area in California. Ford AV representative, Doug Hill, had formerly been on the ministries production staff. Now as a Ford AV account manager, Doug approached the church to find out how he and Ford could be involved and assist the project. After interviewing several AV integrators, the church ultimately chose the Ford team, starting with a contract to consult and design the technology systems – supplying documentation including power, conduit, space requirements, system line drawings, and more for the architect and design trades to use for their construction documents.

This contract was done with the intent that Ford would also perform the installation during the “build” portion of the project. The church expressed it chose Ford because its presentation was less about sales and more about partnering with the church to make sure that expectations were met.

Ford AV’s broadcast and ministry design teams began to develop a scope of work with the church. The church had a construction manager on staff who, along with the ministry President, Doug Bachelor, and media director were the primary contacts that helped Ford to ascertain the churches end desire for the new technology.

The ministry leadership also stated a requirement that the equipment and systems could be operated by a skilled volunteer, while maintaining high-quality and not compromising the high-quality production expectations that were critical to best support the church’s mission for both TV and Radio as well as podcasts.

The design stage, which included coordination with the church, architect, construction management and general contractor, lasted about 1.5 years. Once the scope of work and materials list was finalized, the “build” contract began, engaging Ford into the onsite installation — along with a Ford project manager, who had common coordination with the general contractor and other trades at the job site.

Doug Hill, account manager, Ford AV says, “Overall, the church loved working with Ford AV. They enjoyed the collaborative process with Ford’s team to develop a good Scope of Work, as well as the partnership developed during the installation process.

Doug Batchelor, Amazing Facts president and pastor states, “Amazing Facts has been around over 55 years, and it started very small with just radio programs. Now we are on national TV networks across the nation and really across the world and so really, it’s essential for us to have some of the best media technology to produce the best content.”