Hall Research says it recognized a need in the market and developed the HSM-88-4K compact 1U cross-point video switch to address it. As such, the Hall Research 4K 8X8 HDMI matrix switch with IR, RS-232, and IP control is designed to meet professional grade standards but remain affordable.

The product supports HDMI resolutions up to 4K and also supports HDCP 2.2, deep-color video, PCM, Dolby, DTS, and HD audio standards, according to a press release by the connectivity solutions provider.

According to Hall Research, the intuitive design of the HSM-88-4K extends to its control command set. Commands use simple English syntax and a host of commands are provided for monitoring and controlling all aspects of the product’s function. Both IP/Telnet and RS-232 ports are included. The matrix also ships with an IR remote control that can be used to route video. 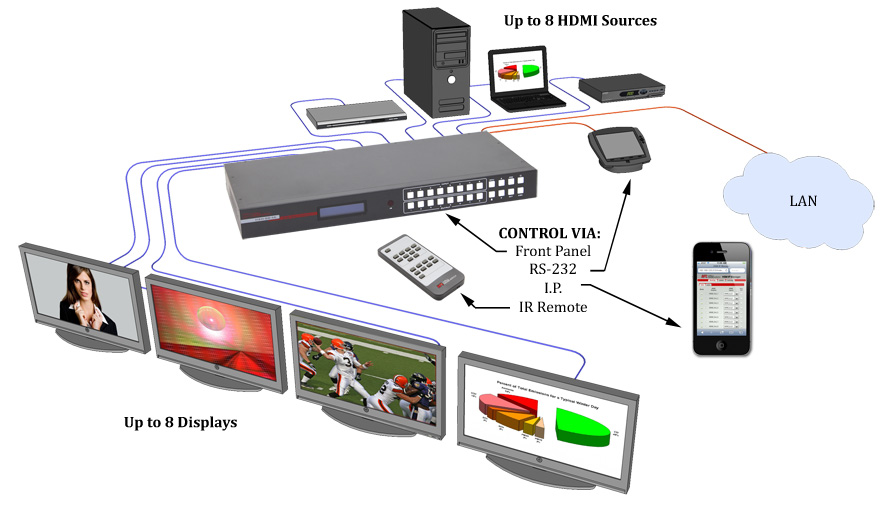 Related: Will InfoComm 2017 Hasten Rise of AV-over-IP, Death of the Matrix Switch?
Intelligent EDID management allows users to specify fixed EDIDs for each input, but the matrix can also calculate EDID for each input intelligently based on the capabilities of the connected outputs.

This will ensure that all outputs will have a video, and the video will be at the highest resolution possible.

For example, if an input is routed to two outputs where one supports 4K video but the other supports 1080p, the matrix uses an EDID with 1080p forcing the source to output 1080p, but if  all routed outputs support 4K, the matrix will automatically use 4K as the native resolution in its EDID.

According to Hall Research, the HSM-88-4K is ideal for conference rooms, multimedia presentations, digital signage, houses of worship, and many other applications.

As for its relative affordability, the HSM-88-4K has a suggested list price of $2450 and is available from stock.