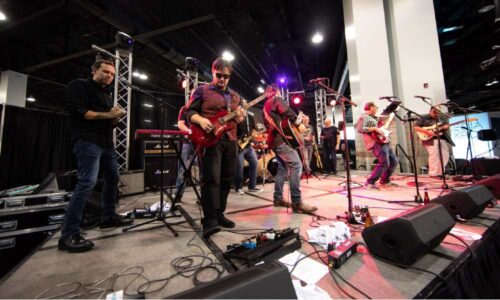 Are you ready to rock at CEDIA Expo 2022? Beyond the sound rooms and other AV demos that get the music cranked up on the show floor of the annual custom integration tradeshow, this year’s CEDIA Expo in Dallas features a special return engagement from the CE Pro All-Star Band for attendees to enjoy.

For the first time in three years, the CE Pro All-Star Band will return to CEDIA Expo for a live performance. The long-awaited reunion will kick off after the conclusion of the CE Pro BEST Project Awards gala on Thursday, September 29.

The CE Pro All-Star Band will once again bring together some of the most talented professionals in the custom electronics industry for a 90-minute live music showcase.

Covering music from a range of decades, the CE Pro All-Star Band will perform tunes from the likes of The Beatles, Van Morrison, Tom Petty, Foghat, Foo Fighters, Hootie, and the Blowfish, and Lynyrd Skynyrd. With CEDIA Expo being held in Dallas, the band is set to infuse the performance with plenty of Southern Rock.

“I’m honored to be included with this great ensemble of talent – from all parts of our industry,” says Bigoness, chief marketing officer for D-Tools.

“This year will be extra special. For many of us, it is a return to CEDIA Expo and a chance to reconnect with many friends and colleagues. We’ve put together a fairly ambitious set this year and pulling it all together remotely has its challenges. Still, it is truly a labor of love.”

“For me, performing with CE Pro All-Star band is one of the show’s highlights,” notes Silkin, president, and chief operating officer for Digital Sales Group Metro/DSG Distributors. “Something magical happens every time we get together. I’m confident this year will be our best performance yet.”

The CE Pro All-Star Band’s rockin’ reunion will occur on Thursday, September 29, at the Smart Stage in the Kay Bailey Hutchison Convention Center. The event will follow the CE Pro BEST Project Awards ceremony, which begins at 4 p.m.

Attendees will be encouraged to sing, dance, and even join the band on stage in the return to a live performance.

While the band last performed live at CEDIA Expo 2019, members also put in major efforts (with technical help from others) to collaborate for the 2020 CEDIA Expo Virtual event, when remote individual performances were impressively mixed to create streamed “concert” videos.

“The CE Pro All-Star Band is such a fun time for me to spend time with a great group of guys that are very humble and talented,” says Archer, who as CE Pro senior editor has spearheaded the band’s appearances at CEDIA Expos over the years.

“I feel fortunate to be able to take the stage with the guys and share our collective love of music. I also think it’s very important for everyone outside of our little band circle to know how much of a commitment it is to learn these songs, and it’s great to share the same collective goal of putting forth the best possible performance during our appearance.”