While most commercial integrators take a standard design/build approach, Diversified serves some unique clients in an unusually flexible way. One example is Cubic Corporation, an international technology company serving military, police and public transit agencies. The company began its relationship with Diversified about eight years ago, buying individual pieces of equipment, but since 2013 has focused more on integrated AV systems.

“It’s an unusual situation, in that the buyer, Senior Communications Administrator Brian Feldmann, does his own installations, while we handle design, engineering, programming and commissioning,” says Steve Gordon, Account Executive for Diversified’s Advanced Visual Environments Division. Gordon works closely with Kelli Hobson of Product Sales, and together they provide the expert advice, equipment and engineering services Feldmann needs.

“We are always willing and able to customize our offerings, even for a more standard design-build project,” Gordon says. The hybrid approach Diversified takes at Cubic Corporation, while unusual, may be of special interest for anyone directing a multi-national technology program. 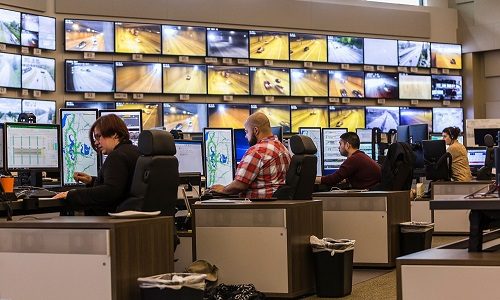 Cubic Corporation has three business divisions. Cubic Corporation Global Defense is a leading provider of live and virtual training solutions for military and police in the US and 35 allied nations. Cubic Mission Solutions provides networked Command, Control, Communications, Computers, Intelligence, Surveillance and Reconnaissance (C4ISR) capabilities for defense, intelligence, security and commercial missions. Cubic Transportation is the world’s leading integrator of payment and information AV systems for public transit agencies. Together they have 60 offices on five continents with more than 8,100 employees.

All divisions rely heavily on teams working in engineering, sales, finance, accounting, logistics and human resources, and Feldmann says that his priority is to help these teams work effectively. “I can’t think of a single team that doesn’t have members in more than one location,” he explains. To simplify long-distance interactions, Feldmann and the Diversified team have created standards for their AV systems to go into various sized rooms, all of which incorporate video conferencing. Voice communications are not enough, Feldmann believes, even with web-based collaboration and document sharing.

“If you can see someone’s face, it’s a lot easier to understand what they mean,” he explains. “For the most part, we try to be platform-agnostic, using a computer with USB cameras and microphones that will work with WebEx, Skype, GoToMeeting and others,” Feldmann adds. “I can’t always control the quality of the connection, but I can enforce a standard that removes technology as a speed bump. If we do have a problem, I know we don’t have to look at the devices as the source, and that simplifies a solution.”

As the senior communications administrator, Feldmann describes his position as the AV systems expert of the IT group’s infrastructure team. As such, he frequently travels around the country and the world, sometimes bringing others from the team, and always working with local IT people. The chance to involve local people is one of the main reasons he handles system installations in-house.

“A local technician always participates in the planning for the AV systems and the network closet – and he or she is always a part of the installation team. It’s an easy baptism into the technology, and it helps local people support it better.”

Local involvement, Feldmann believes, should not stop with the IT team. He works hard to create rooms that anyone in the company can use with minimal help, no matter where they may be. “We train people well, but once that’s done, we want to make sure they know exactly what to expect. If a program manager in Orlando wants to talk to an engineer in New Zealand, he should be able to do it from any room in Orlando without having to relearn the system.” In the same way, if he flies out to New Zealand for a meeting, “We want the room there to work the same way, too.”

A mid-sized room adds dual screens. A large room uses larger displays, a 10” Crestron touch screen, and a dedicated Cisco hardware endpoint as well as a computer for web conferencing.

“Here Steve and his engineers came up with a nice trick, sending the same camera and microphone feeds to the Cisco system as the soft codec.” There’s a portable system as well, based on a Premier rolling cabinet that can hold a 50 – 80” display plus a computer, speakers and camera. And there’s a standard for flagship rooms, including client demo areas, large combinable conference rooms and other unique spaces. These all have specialized capabilities but include the base components and an extremely similar user interface.

“It’s a standard but it’s always evolving,” Feldmann says. “I may go to Kelli and say, ‘I’m not in love with this microphone, what else is available?’ She’ll talk to her people and Steve’s engineers, give me alternatives, and then give me a demo, either coming out to San Diego or sending me samples to try.”

Supporting and Simplifying the Work of the Client

A big part of Hobson’s role has been to set up special relationships between Cubic Corporation and manufacturers including Crestron, Sharp, Vaddio, Biamp, and Liberty AV. These may include volume pricing programs, extended warranties and priority support. “Our job is to work with our team to identify those components that best fit what Brian is trying to accomplish, then secure a good deal,” she explains.

Gordon sees his role as supporting and simplifying the work of Feldmann and his Cubic Corporation team. Diversified Installation Services handles all custom engineering and provides Feldmann with the drawings and schematics he needs. They program the control system and DSP, assemble the equipment racks in advance and pack them up as kits with the displays, touch screens, cameras, microphones, and all necessary cables and connectors. Then they ship the kits on a just-in-time basis, so they arrive a few days before Feldmann and his team fly out for the installation.

AV Over IP: A Guide to Products and Solutions

Once the installation is complete, Diversified sends a technician to commission the new system, testing everything, adjusting displays and audio processors, and finalizing programming. “They have a man who is an audio savant,” Feldmann adds. “He’ll say, ‘this room will sound good’ or ‘this one needs acoustical panels,’ and then he will make sure it works well.”

So far, Diversified has supplied equipment and integration mainly within the United States, but they recently announced the formation of the Global AV Partnership, a consortium of leading audio visual integrators in North America, Europe and Asia. “That excites me, and I intend to use it,” Feldmann says. He explains that he sticks with Diversified because they’ve offered expert advice and high-quality service and support. (Click here to visit the Global AV Partnership website).

“Diversified was there for us early, and their team has always been helpful and good to us. They understand our standards and our cultural requirements, and the two sides of the house play well together and make my job easier. “As we’ve grown,” he adds, “they’ve had the resources to accomplish all that we’ve asked. I can call Kelli, and she’ll connect me to my integration guy, design guy, programmer or project manager. I can pick their brains, and I know I can rely on them. It’s like having a friend in the AV systems business.”