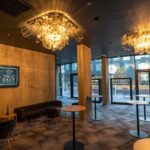 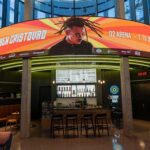 To provide the state-of-the-art Stages Hotel Prague with a comprehensive and versatile networked audio system, AV integrators Nowatron Elektronik and AudioMaster CZ installed a wide range of dynamic and powerful HARMAN Professional audio solutions. Situated near both the O2 Arena and O2 Universum, the Stages offers visitors to Prague a luxury experience that showcases the city’s eclectic music and arts scene.

Along with its modern rooms, restaurants and meeting spaces, the Stages also features a fully linked audiovisual network between the hotel, the O2 Arena and O2 Universum. This ambitious system allows for independent or shared media broadcasting and streaming between the three venues in real time with minimal latency.

Need for A Modern, Accessible Solution

According to the Stages, this system is the first of its kind in the Czech Republic hospitality industry. As a result, the Stages required a modern AV solution that balanced advanced features and bandwidth with ease of use and accessibility. To meet these requirements for the hotel’s audio component, Nowatron Elektronik and AudioMaster CZ designed a versatile and future-proofed system using JBL Professional, Crown and BSS solutions.

“We were contacted to help with the installation because the hotel wanted to make something special — a hotel not only for regular guests, but also for all guests to the O2 Arena or Universum,” Matěj Sborový, project manager, AudioMaster CZ, says. “All three buildings are interfaced via optical connection, and they can transfer all audio and video signals from one building to another. All of the system functions had to be done very easily and without any complications for the user, so we had to implement the simplest user interface possible.”

Outfitting the Zones at Stages Hotel

The Stages Hotel’s audio system divides into 13 zones, each capable of independent AV output. Some zones also include sub-areas such as conference rooms, which in turn have their own output. This intricate system came into place with the BSS BLU806DA digital signal processor with BLU link and Dante. It features configurable I/O and signal processing with “drag-and-drop” controls and a low-latency 256-channel audio bus. With this, the BLU806DA combines high bandwidth and power with ease-of-use for instant and reliable audio distribution throughout the hotel.

Additionally, the system’s Dante-based protocol allows for easy reconfiguring or expansion in the future. This is in case the hotel needs to do so in order to accommodate either of the O2 venues.

Along with the BLU806DA, the system backend also utilizes BSS BLU BIB input expanders and BLU BOB1 output expanders. This maximizes the network’s reach within the hotel and seamlessly connects with the O2 Arena and Universum’s respective systems. Finally, BSS EC-4BV ethernet controllers allow hotel staff and guests to quickly and easily control the audio signal for each zone and subzone. Hotel staff can also control each zone wirelessly from a smart tablet.

“The main core of the audio is the BSS BLU806 processor because of its high processing power and Dante connectivity,” Sborový adds. “All of the audio signals are distributed through the hotel via the Dante network. So, hotel staff can easily connect with some converter in any internet socket and pass audio to the processing or DSP processor. For example, the hotel hosts a MasterChef-type show in the restaurant, and they need to use wireless microphones since there aren’t any analog inputs nearby. So instead, they can use an internet connection and wireless system with Dante output and broadcast the audio in the area without any problem.”

Bringing in JBL for Enhanced Sound

The installation team installed over 200 JBL ceiling, pendant, wall-mounted and outdoor speakers throughout Stages Hotel to best accommodate each area’s specific requirements. JBL Control Series speakers accounted for the majority of the system thanks to their high output, reliable coverage and discreet design. The Control 12C/T and 14C/T ceiling speakers, for instance, come with compact full-range drivers for distortion-free audio at any output. They also feature sleek designs that blend seamlessly with the surroundings.

Overall, the resulting audio system provides the Stages Hotel with seamless connection to the O2 Arena and Universum. It also provides plenty of audio control and flexibility for staff and guests as well as potential for future modifications.

“The hotel management is happy that they have everything under control,” Sborový remarks. “They also appreciate that it’s quite easy for them to make any changes now as well as in the future because they will probably in a few years want to do some small changes or something else entirely. With this system, it’s very easy to implement whatever they want.”

Click on “View Slideshow” for images of the hotel.