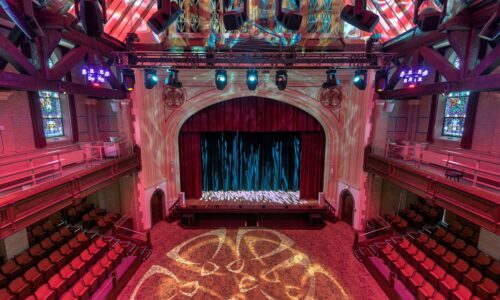 The Scotty encompasses an 800-seat theater, a lower-level ballroom with capacity for 300 people, and more than 10,000 feet of usable space, as well as a full basement kitchen and banquet facility. An L-Acoustics Syva sound system was installed in the auditorium earlier this year by the Chicago office of integrator, Creative Technology.

“Syva was the perfect solution for audio reinforcement at the Scotty,” says Greg Moore, Installations Project Manager for Creative Technology. “It had to sound great, which it does, but it also had to disappear. The aesthetics of this project were of paramount importance to the client. We were able to essentially camouflage the Syva, which we ordered in white from L-Acoustics, by installing them in the fluted trim around the sides of the proscenium.”

The Scotty’s new system comprises one Syva enclosure mounted to each side of the stage, a white Syva Low sitting on the stage below each main Syva column, four KS21 subs in the orchestra pit, and six 5XT coaxials spread out across the stage lip as frontfill. In addition, there is a cluster of two A10 Focus and one A10 Wide per side as balcony fills, as well as two short-throw X12 coaxials as near-balcony sidefills, two X8 speakers as under-balcony sidefills, and two more X12 as under-balcony delay speakers. Six LA4X amplified controllers power the entire system.

“The venue’s acoustics were pretty good to start with, and it has some nice natural diffusion, so there was no need for acoustical treatment,” says Moore. “And with the L-Acoustics deployment, we don’t have to push the system to get the kind of impact we need. The Syva themselves are doing only about 40 percent of the work, well supported by the other speakers, and the Syva Low enclosures are a great intermediary between the Syva and the KS21 subs.”

Jenny Parkhurst, Executive Director of Performing Arts at Scotty parent company The KDB Group, says the Syva system is everything they had hoped for, crediting L-Acoustics and Creative Technology for succeeding in achieving a sound system that satisfies the requirements of modern audiences and professional performers while also maintaining the original architecture of the building and not distracting from the historic interior design.

“While we are not quite open to the general public yet, we’ve had a few test runs of the sound system and it sounds amazing, far exceeding our expectations!” she attests. “We appreciate the time and effort taken by Creative Technology to carefully analyze the performance space, listen to our needs, and implement a state-of-the-art sound system that will prove to be the best in our community.”