West Virginia University (WVU) recently unveiled its renovated Milan Puskar Center, home to Mountaineer football. The $37.5 million project features a range of improvements and additions. These include a modernized locker room and team lounge, an upgraded athletic training room and new hydrotherapy center, remodeled coaches’ offices and a reimagined exhibit space. The updates serve to transform the football player experience while engaging fans and donors in new and exciting ways. Crucially, the project gives the university’s football program a fresh competitive edge for recruiting top talent, with new state-of-the-art athletic amenities that rival those at other programs in the Big 12 Conference. Design and branding play a key role throughout the revamped environment. To facilitate an outstanding outcome, the client chose to implement LED videowall technology from Beaverton, Ore.-based Planar. 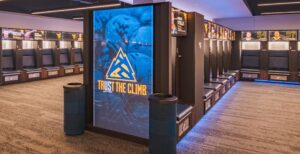 The history and passion of Mountaineer football are celebrated in the Puskar Center’s Hall of Traditions. Previously located in the rear of the building, the renovation gave WVU the opportunity to give the exhibit a makeover and move it to the front entrance. The redesigned look merges historic memorabilia and trophy displays with digital elements to create an immersive experience for Mountaineer fans and recruits alike.

The centerpiece of the new and improved Hall of Traditions is a nearly 38-foot-long, nine-foot-high Planar TVF Series LED videowall with a 2.5mm pixel pitch (TVF2.5) in a 19×8 configuration. Installed by the Warrendale, Pa.-based integration firm BrightTree Studios, the large LED videowall serves a variety of uses and incorporates an interactive component for fan engagement.

By operating a touch football console, visitors can explore WVU football highlights on the LED screen including some of the team’s greatest wins and most historic moments. “The Hall of Traditions is essentially our museum about WVU football,” says April Messerly, WVU senior associate athletics director for capital projects, facilities and event management. “It speaks to fan interaction, but with the ability to easily change what we want to display on the large board, it can become a space for recruiting weekends or fundraiser events. The technology really adds a dimension of flexibility that we previously didn’t have.”

In addition to providing an outreach function and an area to bring donors and boosters to on game days, the Hall of Traditions represents the starting point of WVU’s recruiting path, according to BrightTree Studios’ managing principal consultant, David Vargo. “The LED videowall engages student recruits as soon as they step foot inside, and as they make their way through the Puskar Center and ultimately to the locker room, the technology follows them and works to draw them in.” 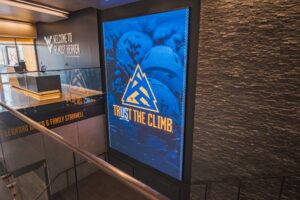 Past the Hall of Traditions and further into the building is a lobby area where BrightTree installed a towering Planar TVF Series LED videowall in portrait orientation that is nearly 12 feet long and 17 feet high (6×15) with a 2.5mm pixel pitch (TVF2.5). The lobby LED videowall is located immediately adjacent to an open double-story stairwell and gives WVU a large digital canvas that can be easily customized, according to Vargo.

“They can display branded content, welcome messages or show highlights in a window. It has a ton of sources,” he says. “This one is our wow factor,” Messerly says. “It’s great for our recruits to see, but it’s also great for our donors and our premium guests. On game days, folks who have premium seating in our Hartley Club area walk right past that videowall. We can display custom content targeting both groups.”

WVU’s commitment to its football program and players is showcased in the upgraded locker room, where five Planar TVF Series LED videowalls with a 1.5mm pixel pitch (TVF1.5) turn a previously outdated space into a dynamic, technology-infused environment. The installations include a main videowall that is nearly 16 feet long and seven feet high (8×6), flanked by four “end cap” videowalls (located the end of a row of lockers) in portrait orientation, each nearly four feet long and seven feet high (4×6).

For driving content, BrightTree incorporated show production software from media server manufacturer Green Hippo, allowing WVU to play synchronized videos across the displays — perfect for recruiting or for generating pre-game hype. “The videos are programmed to play in sync with music, game audio and LED lighting,” Vargo says. “It’s like turning the locker room into a nightclub.”

To safeguard the videowalls during pre-game preparations or post-game celebrations, BrightTree specified Planar ERO-LED (Extended Ruggedness and Optics), a proprietary protective coating that adds durability to the displays.

“Knowing that we have that protection is a huge plus. Planar’s support on both the design and the installation was really valuable,” Vargo says. “The videowalls make that locker room experience,” Messerly says. “It’s an incredible space, and I really applaud everybody for working together to get it right. The finishes, the technology and the sound system all work so well together. It brings a lot of excitement, and we couldn’t be prouder of the outcome.”