AV technology isn’t the first thing most people think about when they’re talking about The Bible, but the Museum of the Bible defies expectations.

Related: 13 Miles of Cable in One Tower: The Mammoth Maersk Building Challenge

Dedicated to one of the world’s oldest texts, the new museum is “resolutely modern, incorporating striking architectural forms and cutting-edge museum technology,” thanks to the work of S2N Technology Group.

Considered to be among the most technologically advanced museums in the world, the Museum of the Bible “harnesses cutting-edge museum technology to create an immersive and engaging experience for visitors as they explore the history, narrative, and impact of the Bible,” according to the company’s submission.

“When we set out on the mission to create the most technologically advanced museum in the world, it was important to select partners that could make that vision a reality,” says Jeremiah Tribble, manager of IS infrastructure for the Museum of the Bible.

“We definitely chose one that complemented our team. Their ability to first understand what we were looking to achieve and then help with design decisions to help control cost and schedule without compromising the outcome is the definition of a true partner.”

Museum of the Bible Tech Specs

Located two blocks from the National Mall in Washington, D.C., the 430,000-square-foot museum features a 140-foot-long, 15-foot-wide LED arcade ceiling, which displays digital art for guests upon their entry into the main lobby.

The third floor houses the World of Jesus of Nazareth Exhibit that transports guests back in time to when Jesus lived, and the fourth floor features the History of the Bible Exhibit that includes a 75-seat theater that takes them on a history tour through Jerusalem.

The sixth floor includes the Museum’s restaurant as well as a scenic Biblical Garden.

Whereas most museums in D.C. take 10 years from conception to grand opening, the Museum was completed only five years after project development. The Museum officially opened to the public on Nov. 17, 2017.

S2N’s initial contract with the Museum of the Bible consisted of a consulting agreement for design-assist services.

This led to the award of a contract for the museum technology systems integration. S2N is a subsidiary of Clark Construction Group, which was the general contractor on the project.

S2N Technology officials leveraged their understanding of the general contractor to facilitate a productive relationship throughout the fast-tracked construction schedule. 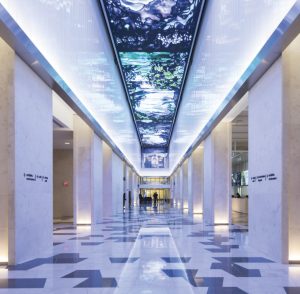 Through cutting-edge technologies, such as digital docents, immersive theaters, interactive exhibits, and sprawling LED displays, the Museum of the Bible is “revolutionizing the visitor experience and how museum-goers interact with the impact and narratives within the building,” according to S2N.

The integrator helped the client advance their technology goals by setting the technology standards and a low-voltage technology budget for the facility. The standards benefited the museum by creating consistency between the multiple vendors and the budget allowed for early planning before construction began.

Once construction was underway, S2N acted as a single point of coordination between the client, GC, trade partners and technical vendors to streamline management of the Museum’s low-voltage scope and save critical time in the final stages of the project.

Overall, S2N managed a team of more than 10 trade partners and vendors while coordinating with the Museum’s exhibit and lighting teams.

This acoustic enhancement system provides the ability to control and transform the acoustics in the theater.

With more than 100 hidden speakers and microphones, the system’s algorithms create an acoustical space to suit the particular type of performance being offered.

S2N begin working on the Museum of the Bible project December 2014 under the initial consulting agreement. The museum technology implementation began in May 2016 with substantial completion in October 2017. 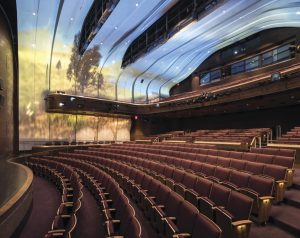 S2N Technology also installed an AV package that included an acoustic enhancement system in the Museum’s 472-seat World Stage Theater, enabling the acoustical properties of the room to be altered to suit the nature of the event.

During the project, S2N’s team installed 350,000 linear feet of cabling specifically for the exhibit areas.

Because the Museum features five main exhibit areas —which were designed by four different exhibit designers —the scope required coordination and project management.

S2N Technology was responsible for collecting all of the design information from each exhibitor and creating a working set of documents that could be utilized in the field. Because of this, all the necessary pathways, backboxes, and cables could be installed correctly and on time.

This initiative involved multiple coordination meetings both prior to and throughout construction.

Read Next: ‘Pro AV Experiences’ are the Future (Not a Scary Concept Or Another AV Industry Buzzword) 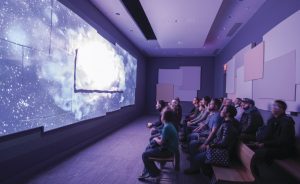