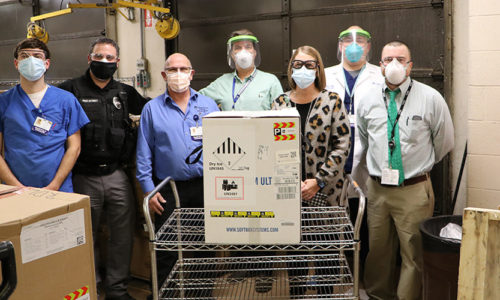 As with any public health crisis, natural disaster or other emergency, it is essential that hospitals constantly review security plans already in place to ensure the continued safety of patients, employees and assets. ASIS, a professional organization for security professionals, recommends facilities review their processes for coordinating with local law enforcement partners and other healthcare facilities to “stay abreast of any potential risks, such as civil disturbances, protests or other security issues” that may arise during the rollout.

Civil disturbances were of significant concern before vaccine distribution began due to many reports of conspiracy theorists looking to disprove the existence of or steal or sabotage the vaccine in order to halt its distribution for a multitude of reasons.

Ben Scaglione, director of security at White Plains (N.Y.) Hospital, is part of a small group of ASIS members who continue to have weekly meetings to discuss the challenges that have come with securing the vaccines, share their experiences and make necessary improvements. While there have been instances of vaccine naysayers attempting to intervene in different parts of the country, overall, it has not been a significant issue, he told Campus Safety. So far, no other members of the 14-person group have reported these types of incidents.

“Security directors…we’re kind of paid to be paranoid,” Scaglione says, highlighting the importance of preparing for the worst-case scenario. “We’re always looking at those possibilities and trying to reduce that risk.”

One advantage hospitals have in keeping potential civil disobedience at bay is the fact that many remain on some level of lockdown, where only personnel and patients are allowed entry in order to reduce the potential spread of the coronavirus. These protocols have been in place for months in some capacity at most hospitals, providing time to iron out the details of keeping out unwanted or unapproved individuals.

Jeff Hauk, director of public safety and police authority services at Memorial Healthcare in Owosso, Mich., stresses the importance of developing close relationships with other department heads within your hospital long before an emergency prompts its requirement.

“It’s the behind-the-scenes stuff — things that you should be doing all along — that’s going to help you when you get into these kinds of situations,” he says. “Networking and partnering up with other department heads across the organization ensures everyone knows each other and wants to help each other out. I think that’s certainly led to a lot of the smoothness of how this has gone for our facility.”

Since Hauk continuously works hard to establish these relationships, departmental heads include the security team in all meetings, whether they are strictly about security or not. Because of his department’s willingness to be involved in meetings that may not directly affect them, these continued and open relationships allow clinical team members tasked with administering the coronavirus vaccine to feel protected because they know the security team supports them in all that they do.

“It allows them to concentrate on the things they need to do and not have to worry about the safety and security of the environment or what could happen,” Hauk says.

If this pandemic has taught hospital security anything, it is the importance of preparing for the unexpected and collaborating, and these types of relationships should continue long after the worst of the pandemic is behind us.

Vaccine Shipping and Receiving Must Be Protected

When possible, many experts recommend security personnel provide escorts during the transport from shipping and receiving to other locations within the hospital and during any other subsequent movements of the vaccine.

For many hospitals, as previously mentioned, this capability is dependent on available resources. At Memorial Healthcare, this was not a significant logistical challenge as the facility already has an armed presence of professionalized officers.

“When they transport the vaccine from a secured environment to the locations for our distribution, that’s escorted from start to finish,” says Hauk. “We also provide an armed officer at the site during the duration of the distribution of the vaccine.”

At other hospitals with fewer resources, this has not been the norm. In these instances, Scaglione strongly recommends that security teams develop close relationships with pharmacy directors and shipping and receiving personnel, so they are always aware of any evolving security needs.

Both Scaglione and Hauk also emphasized to their respective teams the importance of avoiding the public dissemination of details surrounding the dates and locations of vaccine transportation and storage. This requirement should also be communicated with shipping and receiving and pharmacy personnel.

For many hospitals, a significant hardship regarding the shipping and receiving of the vaccine has been the constant changing of delivery times due to both known and unknown factors.

“We have no idea when we’re going to get these shipments, and we have these meetings on an almost daily basis, and so we’re kind of kept in the dark until the last minute,” Hauk says. “Last-minute planning and preparation are certainly difficult to maneuver around and to do it successfully. I think for us, it’s been the challenge of always having to be ready to flip that switch and be capable of receiving the vaccine shipment, and then also being able to provide the appropriate level of security from the point of taking the vaccine and shipment to its distribution.”

Hauk recalls being told four different times that the hospital’s first shipment was about to come in before it actually arrived.

Once the vaccine is safely transferred from shipping and receiving to its point of dispensing (POD), there are many more considerations for ensuring the vaccine remains secure. At a minimum, it is recommended by ASIS that PODs have a camera in the immediate area, allowing a view of persons in the hallway leading to the POD and at the entry point.

It is also recommended that hospitals set up video surveillance monitoring of storage refrigerators and to areas where the vaccine is being handled. High-resolution cameras should be pointed at both sides of the ingress/egress point, and a downward-facing camera in any area where the drug is handled should also be considered.

While some hospitals do have cameras inside PODs for additional security, this is not the case for all. For this reason, among others, most pharmacies have a double system that requires two people be in the room to ensure there isn’t theft or inappropriate waste when handling controlled substances.

“When it comes to pharmacy practices, at least in hospitals, there’s a lot of checks and balances,” says Scaglione. “So it was relatively easy to put this process in place for the coronavirus vaccine and to make sure we were doing all the right things.”

Security experts also recommend carrying over this system into other steps within the vaccine distribution process, such as having two people signing off on and being present during any movement of the product.

Whether it was due to lack of cameras, lack of continued surveillance, or lack of a two-person system, a recent incident in Wisconsin, where a pharmacist deliberately sabotaged hundreds of coronavirus vaccines by removing them from refrigeration and leaving them out long enough to be rendered ineffective, is a perfect example of why these processes should be in place to limit the insider threat. Drug diversion has always been an issue for hospitals — especially in recent years — and the currently thriving black market for the vaccine is even more reason to ensure proper security measures are in place.

To avoid incidents like the one in Wisconsin, many hospitals set up 24-hour remote alarm monitoring to refrigerators, added more locks, mounted them to the floor and walls, and continuously monitor both video surveillance feeds and access control. Many have also ensured a daily inventory of the vaccine is conducted and extra security rounding is completed and documented. Hospitals are even checking to ensure that existing walls prevent ceiling penetration to the PODs.

While video surveillance can be essential in ensuring insider threats are kept to a minimum, implemented access control measures leading up to the POD are just as crucial, if not more. Electronic access control should be established, allowing for the ability to conduct periodic audits as to who is entering the area. Prior to this, a review of who has access to these secure areas should be conducted and limited where possible.

It is also important for hospitals responsible for storing and distributing the vaccine to consider contingency plans for natural disasters or other emergencies that may cause power outages. While the acquisition of backup generators isn’t always handled by the security department per se, some security directors double as emergency managers. Hauk says this step was included in his department’s checklist when preparing for the vaccine’s arrival.

This post premiered on our sister site, Campus Safety.