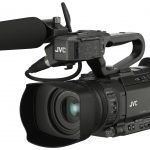 JVC touts GY-HM250 camcorder as ‘the first fully integrated Facebook Live professional camcorder in the industry’ thanks to major upgrade to product line. 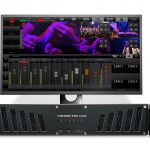 Launching at 2019 NAB, the JVC Professional CONNECTED CAM Studio 6000S is a compact live production and streaming studio that is like a self-contained control room.

For film sessions, Nashville Predators uses a JVC GY-HM200SP 4KCAM camcorder to record video of games at Bridgestone Arena for coaches to study.