That’s one small step for AV, one giant leap for… oh, never mind. The National Air and Space Museum marked the Apollo 11 50th anniversary of the moon landing in July 1969 this week with a projection of a 363-foot Saturn V rocket on the east face of the Washington Monument for two hours July 16-20.

Meanwhile, Poly celebrated its place in the historic moment by highlighting the headsets used both by astronaut Neil Armstrong when he took “one small step for man, one giant leap for mankind” and the NASA staffers at Mission Control. 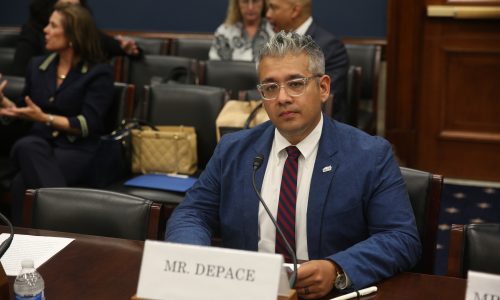 The “Apollo 50: Go for the Moon” show was conceived and commissioned by the National Air and Space Museum through a partnership with the U.S. Department of the Interior and 59 Productions, which does architectural projection-mapping, exhibition design, VR and technical consultancy.

The museum will also present “Apollo 50: Go for the Moon,” a 17-minute show that will combine full-motion projection mapping artwork and archival footage to recreate the launch of Apollo 11 and tell the story of the first Moon landing.

The free show will unfold on the face of the Washington Monument and supporting screens, including a 40-foot-wide recreation of the famous Kennedy Space Center countdown clock. It will run at 9:30 p.m., 10:30 p.m. and 11:30 p.m. on Friday and Saturday.

In the Middle of Apollo 11 History

As part of the Apollo 11 50th anniversary of the moon landing, Poly CEO Joe Burton rang the closing bell at the New York Stock Exchange.

Poly explained on its website how the company got involved with the historic moment.

“At the height of the race to space, NASA challenged us to build a comfortable headset that would equip astronauts to communicate with Mission Control from the earth to the moon and back again,” the page dedicated to the moon landing’s golden anniversary says.

Plantronics created what it calls “a light, comfortable headset engineered to endure the unpredictable rigors of space” worn by Neil Armstrong on July 21, 1969, when he became the first person to step onto the surface of the Moon.

Armstrong said the historic words “one small step for man, one giant leap for mankind” into the headset, which Poly officials say was engineered and designed in 11 days.