“If sound and imagery were really 50/50, then audiences would like a good video/bad audio scene as much as a bad video/good audio scene,” he says.

Why ‘Star Wars’ is a great example…

“The problem is [they] believe George Lucas’ whimsy as truth, ‘sound is 50 percent of the picture.’ He was joking. If sound were 50 percent of Star Wars, he wouldn’t have hired the greatest composer of our time and the greatest sound design team of all time to create its soundtrack.”

Lewis laments however, that the narrative of audio and video residing as equal partners still exists, but through the 85 hours of education on his website, he says that students can learn how to produce “Hollywood-level sound” in their productions, and how to deliver that quality on a professional level.

According to Lewis, the students are taught how to first capture good sound. Once the audio is captured, he teaches them about the differences between what they think they are hearing and what they are actually hearing.

“If the most honed minds in the business have wonderfully tuned and treated rooms, why would anyone think they shouldn’t too,” comments Lewis.

“If media creation is simply a hobby, keep enjoying your hobby, but if you want to make it complete, you must have the basics: good speakers in the right place at the right angle at the right volume [isolated and stabilized], and [the] primary reflections taken care of.” 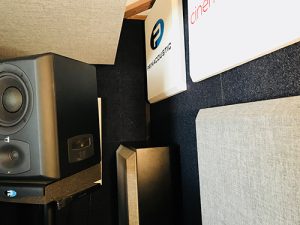 Lewis has created several demonstration videos with the help of Primacoustic to illustrate the differences between good and bad sound.

Using a combination of Primacoustic Broadway panels, as well as the company’s Broadway paintable panels — and other products such as its Bass Traps, Nimbus ceiling clouds and Recoil Stabilizers for speaker isolation — Lewis designed a quality listening space for his Studio B environment.

“Even though our situation was complex, we were still able to get a powerful reduction in primary and secondary reflections, as well as a 15dB reduction in ambient noise,” says Lewis.

“In fact, once installed, we started noticing the self noise of the 5.1 speaker installation we have in the studio, which we never heard prior to that.”