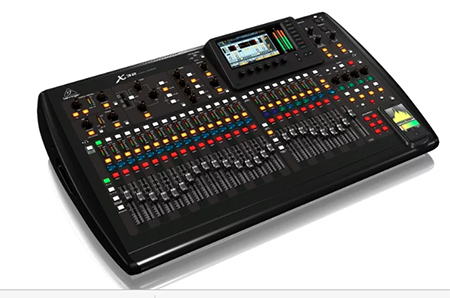 The Behringer X32 digital audio mixing console offers a host of features for a reasonable price.

A recently released study from Futuresource Consulting estimates the market for audio mixing consoles is expected to grow by 5 percent.

Futuresource says that their analysis of the mixing consoles category shows products that blend together multiple sources are experiencing a shift towards the lower end of the market, cannibalizing mid-market sales.

“They far out-class and out-perform their predecessors of just five years ago.

“Today, low-end mixing consoles can provide much of what a midrange consoles used to deliver, compelling buyers to purchase low-end solutions to meet their mid-range needs.”

According to the research, the audio mixing consoles market produced approximately $724 million in sales this past year and is expected to experience an increase of sales of more than 5 percent.

“Looking at the high end of the market, we’re seeing a lot of saturation,” explains Rasmussen.

“Here, it’s mostly about replacements and upgrades, though there are still opportunities within broadcast, touring, concerts and large events.

How Going Digital Affects the Market

Another trend within the audio mixing consoles category that Futuresource has uncovered has been the shift from analog to digital technologies.

Futuresource says the highest price analog consoles have always been limited by the low end of digital console pricing. With the prices of digital consoles continuing to fall, the market for analog products will continue to shrink, the research company concludes.

One example Futuresource sites is the Behringer X32 console, as seen above.

Introduced just over five years ago, the X32 digital audio mixing console offers 32 channels, 16 busses, and an array of built-in effects at a price point that is widely attainable.

“Fast forward to 2018 and our channel research shows that customers expect new console products to do far more for less,” comments Rasmussen.

“Delivering more features, more plugins, effects built-in, rather than outboard; more input and output channels, DSPs included, and more busses. All at the same price or for less.”

Looking ahead, it is expected that audio engineers will use more smart devices to mix audio content. Within the audio industry this trend is called, ‘mixing on glass,’ and this trend is set to drive a new era of product competition.

“As with other elements of the audio market, mixer consoles are taking a financial hit from the pervasiveness of video,” adds Rasmussen.

“When audio products compete for budget dollars with video, more often than not, video prevails. Combine this with stiff competition and heightened customer expectations, mixer brands need to play it smart and keep their cool in what, despite the odds, continues to be a profitable sector of the audio industry.”