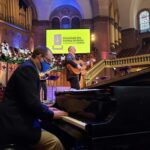 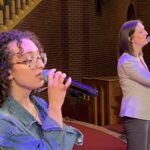 “When the pandemic hit,” says Stafford, “and we transitioned to broadcasting church services online only, we had to retool our monitoring needs for a virtual environment.” He adds that they also couldn’t have more than one vocalist using a floor wedge due to social distancing.

Stafford continues that in-ear monitors (IEMs) were the obvious solution. However, he recalls hearing volunteer vocalists struggle with IEMs. Stafford cites the reason being the experience of extra bass pressure and over-isolation while singing. He remarks, “It’s easier to play an instrument with headphones/IEMs than to sing with them because of head resonance and isolation.”

Features of the Solution

Per a statement, ASI Audio 3DME system appeared as the solution to the issues surrounding deploying IEMs for the vocalists. The system consists of Active Ambient earphones with embedded binaural microphones. It also has a bodypack that houses a headphone amp and dual mic preamps. Additionally, it has earphone and monitor I/O and DSP for signal processing and mixing.

Users can control the system through the free companion ASI Audio App. The app allows pairing any common portable device with the 3DME bodypack mixer. This then provides untethered adjustment of the system’s seven-band independent stereo EQ, limiter threshold and the blend of monitor mix and stage ambience.

“In my experience,” says Stafford, “the most pronounced benefit from the ambient technology is experienced by the vocalist.” He adds that vocalists enjoy the ability to establish their monitor mix with the ambience off and then add the room back in. According to Stafford, it then feels like the IEMs disappear. “They don’t feel the need to take one ear out to hear the room or their own voice,” he says.

Stafford also points to situations where multiple vocalists share a monitor mix. “Even then,” he says, “the ambience helps them hear their own voice more prominently.” For Stafford personally, it has to be wireless and untethered.

Stafford remarks that the 3DME system gives him freedom. He then highlights the benefits of not having to take the ears out. “It’s very helpful to move between playing guitar, conducting an orchestra or going backstage,” he adds.

Stafford also says he can now hear the orchestra without needing a mix from the board. Furthermore, they sound like they’re in front of him. He can also hear the choir and the organ without needing the board’s help. At the same time, he can notice a question from someone behind.

“I like the 3DME system,” Stafford concludes, “and believe that it addresses the important problems and barriers that make singers disinclined to opt into an IEM system.”

Click on “View Slideshow” on upper-right corner to see images of the Moody Church vocalists in action.