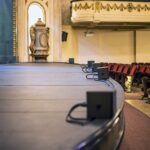 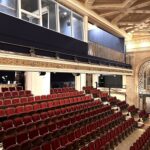 After a renovation in 1917, the venue underwent many incarnations over the last century as a touring production house, movie theater, television studio and more, but had mostly relied on its ground-stacked generic PA system. It was long due for a proper renovation and that finally happened in 2022. The multi-million-dollar update now includes a new L-Acoustics Kara II-based loudspeaker system. Consultant Threshold Acoustics and integrator OSA Integrated Solutions jointly designed the project.

“Threshold Acoustics was contacted by the venue’s new owners who required a new AV system, including the PA system,” says Brandon Gardner, director of AV integration for OSA, which installed the new loudspeaker deployment this past spring, along with a DiGiCo Quantum225 FOH console and D2-Rack as part of the project. He continues, “Given the scope of the work on the theater and the time frame, it was decided that OSA and Threshold would work together on a design/build approach that would get the theater the sound it needed as efficiently and effectively as possible.”

That effort extended to an entirely new infrastructure for rigging, power and cabling —designed by Schuler Shook — part of which supports the new PA system. This system provides the sound for the wide array of events and performances the theater is known for. In the early 1900s, it was vaudeville and operas; today, the schedule also includes musicals, orchestral concerts, dance performances, and corporate events, as well as NPR’s long-running and popular news quiz show, “Wait, Wait… Don’t Tell Me!” One PA would have to do it all and L-Acoustics’ Kara II was deemed the one.

Older venues like the Studebaker Theater can present unique challenges. In this case, coverage was key—getting even sound into the far reaches of the room and across the seating in the balconies, which had never been properly covered by previous sound systems, says Gardner. “That, and having a PA that would work for high-decibel concerts as well as nuanced productions like corporate events and ‘Wait, Wait…,’” he explains. “Kara II can do all of that and still have a low profile, letting the beauty of this theater shine through.”

Mercer M. Aplin, senior consultant for Chicago-based Threshold Acoustics, says the geometrically diffuse space was indeed a challenge, as was the sophisticated production scheduled for this past summer, which opened the new and improved “Studebaker Theater: Skates,” a new musical described as “Grease’ meets ‘Hairspray’ with a dash of ‘Xanadu,’” and starring American Idol alums Diana DeGarmo and Ace Young.

“The audio renovation was complex and time was tight, and we were at the mercy of the same supply-chain issues that the rest of the professional AV industry was experiencing,” says Aplin. “So we decided to partner with a contractor that could assist with the engineering efforts and with coordaining the installation of miles of new conduit. We partnered with OSA because they have experience with complex renovations and, as a rental house, they could temporarily fill in any gaps in the system with rental equipment while we were waiting for the new gear to arrive.”

Threshold went with an LCR design, one that would address all of the venue’s theatrical requirements, with the center cluster tuned for vocals, and the left and right as main music arrays. The balconies—there are two, with the lower one larger—were the main task, and using L-Acoustics Soundvision software, Threshold was able to position a combination of 5XT and X8 speakers to cover every square inch of those spaces.

“We used two lines under the lower balcony—one line of 5XT and one of X8—in order to get low-frequency coverage to the main house mix position under there. We utilized a similar technique with a single line of X8 to serve the balcony seats and a second mix position on the balcony,” Aplin explains. “The Studebaker Theater presented us with some real challenges and L-Acoustics offered us real solutions.”

The new system comprises eight Kara II speakers per side, with a center hang consisting of eight Kiva II speakers, while four flown KS21 subs provide the low end. Five 5XT speakers line the lip of the stage as front-fills, with five more used to reach under-balcony areas. A combination of 20 X8 speakers are used as side-fills, deeper under-balcony fills, upper side-fills, and coverage for the VIP seats. Four LA2Xi and eight LA4X amplified controllers power it all.

And every one of those components serves a specific purpose in addressing the venue’s acoustics. “These old theaters were created before amplification and were designed to make the human voice heard throughout, especially in the corners,” explains Kevin Scott, technical director at the Studebaker Theater.

Scott notes, “Pushing amplified sound into the space creates a mess of reverb and reflections. L-Acoustics speakers were carefully chosen to be able to have pinpoint-precise audio into the corners, especially under the balcony. The result has been tremendous; we can turn the system on half as loud as before and get twice the clarity and coverage.”

Scott adds that Threshold Acoustics carefully charted the room’s challenges, using pink noise to map its reflective signature. “Our new high-quality Kara II PA, combined with some acoustical treatments, like curtains, has really made the Studebaker Theater’s sound pop,” he says. “Plus, it’s a very versatile, dynamic, and multipurpose system that works well for loud music, spoken word, and everything in between.”