Like a cultural lighthouse beckoning visitors to Toronto’s artistic shores, the Harbourfront Centre Theatre (HCT) is the jewel in the crown that is the city’s iconic waterfront park. Seating only 350 patrons in its normal configuration, the theater has impressively hosted performances by A-list musical artists like Celine Dion and Julio Iglesias, top theatrical performances including the musical STOMP, and its own 2001 “World Leaders: A Festival of Creative Genius.” This featured appearances by Quincy Jones, Frank Gehry and Stephen Sondheim. Being a popular spot, the HCT now has a sound system that can cover every base — a new L-Acoustics A15 system designed by Toronto-based Engineering Harmonics and installed in late-2021 by Solotech.

The venue’s new PA typically comprises 19 L-Acoustics A Series enclosures arranged in a flown LCR configuration — seven A15 Focus for the left and right arrays, with four A15 Focus over one A15 Wide in the center — plus six SB18m subs hung three per side behind the left and right main arrays.

Four coaxial X8 spread out across the stage lip as front-fills, while an A15 Wide atop a KS21 sub on each side of the stage provide deck-fill and additional LF reinforcement.

A total of 30 ultra-compact 5XT deliver side-fill coverage to all three levels of seating, while a single centrally-hung A15 Wide provides upper-balcony delay fill. Eight LA4X amplified controllers power the main arrays, with four LA2Xi for the side/balcony-fill speakers. 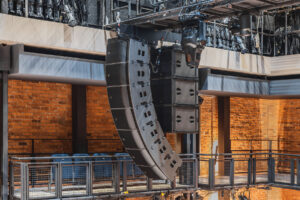 The system had to be flexible: the venue can be transformed into various seating configurations, from a 350-seat proscenium setup to a maximum in-the-round capacity of 422 seats with two balcony levels and three lobbies. As a result, the sound system needed to be reconfigurable, capable of being moved upstage for when the venue is in a hybrid standing/seated mode and downstage for a conventional seating mode. Furthermore, it’s also a very acoustically challenging space, narrow and vulnerable to echoes and reflections. So the sound system had to accommodate asymmetrical speaker placements.

“It’s a very tight shoebox theater and it needs to serve a lot of different functions, so the sound system had to be very flexible,” says HCT director of production Jamie Rodriguez, who points to the highly directional nature of the A15 that made it the right choice. “We needed a speaker with asymmetrical geometry, with the ability to focus on how the flexible seating can be configured here, and the A15 is literally the only speaker on the market that can do that.”

Rodriguez adds that L-Acoustics’ A15 is able to keep that focus, whether deployed upstage or downstage, depending upon the seating configuration used, and can do so while providing a state-of-the-art, rider-ready PA solution that visiting artists don’t have to think about. “When they come here, they know it’s a world-class PA system,” he says. “It’s also a very flexible system. For instance, it sounds phenomenal for music, as you’d expect L-Acoustics to, but it’s also so well-tuned for spoken word, such as our literary event, The Author’s Box. Those underbalcony X5 speakers get every syllable and nuance across to every seat.”

Engineering Harmonics senior consultant and partner Martin Van Dijk notes that the venue’s geometry was its main design and installation challenge; especially in terms of finding a sound system that could address both its acoustical and program needs. “It’s narrow but also very tall, with balconies around the perimeters, and the seating is configurable, with the lower part sometimes standing-room, sometimes raked seating,” he explains.

“Depending upon the program, you might have audience standing in the balcony perimeters that could get hit with a lot of sound, which was necessary in order to reach all of the seated audience members. However, when no one was in those spaces, the energy would hit the brick walls behind them and cause unwanted reflections. It was a challenge, but the A15’s Panflex asymmetrical capability is what gave us the means to address that. It’s a very narrow space, so having something that was 70 degrees horizontal was critical to preserve intelligibility in the space and reduce disruptive reflections off side walls,” Van Dijk remarks.

He adds that L-Acoustics’ A15’s full-range bandwidth was another reason for its choice. Some of the events that take place there, such as dance, don’t require the subwoofers. “The full-range capability of the A15 meant we could achieve the desired amount of low end for certain events without needing subs,” he says. 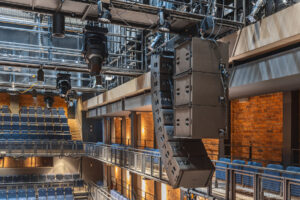 Another view of one of the theater’s new L-Acoustics main/sub hangs. Image credit: Brain Medina.

Additionally, while the entire system can be moved up or down stage, the system’s center cluster is also available unilaterally for events such as spoken word. “They can drop the left and right clusters and change the profile of the system, which can really open up the stage area,” he says. “That same flexibility, the ability to move different parts of the system to different parts of the room near the stage, will be useful if the venue ever decides to add immersive sound, such as the L-Acoustics L-ISA system.”

Finally, Van Dijk points out one other reason for choosing France-based L-Acoustics. “All of the main sound system manufacturers have certain aspects of sound or operation that they’re particularly good at, and for L-Acoustics, one of the most important things they excel at is exceptional tonal continuity between products,” he explains. “There are a number of different series of speakers used here, but the overall sound has complete consistency. Like a great show, all the parts come together to form a perfect, seamless whole.”