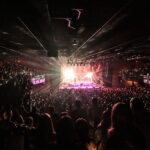 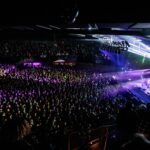 When Grammy Award-winning musician Billy Strings stepped onto Roadrunner’s stage for his sold-out show in March, the brand new Boston facility officially became New England’s largest general admission venue. The 50,000-square-foot space at Allston-Brighton’s Boston Landing development was initially conceived as a Celtics training facility. However, The Bowery Presents (TBP) and AEG saw the available space as the ideal location for a 3,500-capacity live music venue that would put a premium on both the artist and audience experiences. The concert promoters wished to fully realize the sonic end of that mission. For this, the Roadrunner team tapped NYC-based integrator See Factor to supply the room with an L-Acoustics K2 loudspeaker system.

Roadrunner is the third Boston-area venue owned and managed by TBP. It also operates Harvard Square’s 525-capacity Sinclair and books the 1,200-capacity Royale in the city’s Theater District. The new $20 million Roadrunner provides unobstructed views from every spot in the house. It also features a scalable stage and room design.

At its largest, the stage spans 60 feet to accommodate full arena-sized touring productions. However, operators can reduce its footprint as well. Therefore, a house PA was designed to travel upstage/downstage on trolleys to three different positions. This helped deliver more intimate experiences for smaller-capacity crowds.

“When we finally got in the building and began incorporating all of the production elements, we decided to make a few changes from the original design based on our desire to keep all of our production elements mobile for multiple room setups and artists’ needs,” says Morgan “Mo” Russell, Roadrunner technical director of audio. He serves alongside Roadrunner production manager Eric Jenson and A2 Reid Calkin as the primary audio crew for TBP’s new venue.

Setting up the System

Russell continues, “All of those considerations led us to deploy main hangs of 12 K2 enclosures per side with six flown KS21 subs in cardioid right behind them for true full-range left and right, and these are all flown on custom-beam trolleys that can travel up to 16 feet out into the house when we shrink the venue based on production needs.”

Roadrunner also has eight A15 Wide enclosures by L-Acoustics hung as under-balcony fills. Alongside this, it has two A15 Wide as over-balcony fills that “follow left and right accordingly to maintain stunning stereo imaging throughout the venue,” Russell notes.

On the sub feed, the venue has 10 KS28 suspended approximately half an inch off the ground, flown from the front stage decking. This allows the club to move the entire ground sub cluster forward as a unit when it builds the stage out to decrease the room size. Furthermore, eight Kara IIi on the downstage-edge riser decks handle front-fill. These also move forward seamlessly with the ground subs.

Onstage, the venue’s monitoring amenities include 15 available X15 wedges. Plus it has stereo side-fills consisting of two A15i Focus and two KS28 subs per side. LA12X amplified controllers drive most of the house and monitor systems, with a few additional LA4X.

“I have been working with L-Acoustics for a long time now, so it’s an easy fit for us at The Bowery Presents,” shares Grabe. He also serves as the head sound engineer for Manhattan venue Terminal 5. “Both companies have a great relationship, and L-Acoustics has been amazing with taking care of us for Roadrunner and our NYC builds, including Brooklyn Steel, Terminal 5 and Webster Hall. Plus, when we had to modify Boston’s new design on the fly — first for sightline issues and then for flown sub weight issues — Sully at L-Acoustics was always there for us to check our work,” he remarks.

Long before the PA assembly at See Factor in Queens and its addition to the new venue in touring cases, TPB director of operations/construction Scott Raved designed the room. He also ensured that it was acoustically treated and isolated from the club’s neighbors. This included the adjacent TRACK at New Balance sports complex.

Going all the Way

“I have taken point since the initial design process began to final installation of the one-of-a-kind moving production elements at Roadrunner,” Raved says. “With the help of a very deep bench of experts in their related fields, Roadrunner’s production is the best embodiment of Bowery’s combined experiences and expectations of any of our venues so far.”

He continues that specific to the audio system at Roadrunner, L-Acoustics has emerged as a great partner throughout the process. “Lorne and Sully worked together on Roadrunner’s Soundvision files for more than two years. The design has evolved from a 3D file to a hole in the ground, then a completed venue with robust exterior sound containment, to the acoustically treated interior we have today. And L-Acoustics has been there for us all the way, including fine-tuning the new rig in the middle of the night, just a few days before the first show,” Raved proclaims.

The venue also sports new DiGiCo Quantum225 consoles at both the front-of-house and monitor mix positions. Moreover, Roadrunner features an L-Acoustics P1 processor at FOH paired with five LS10 switches for Milan-AVB conversion, system control and atmospheric adjustment. The entire PA is run via AVB, which offers a significantly improved high frequency response. This is due to better timing coherence between vertical loudspeaker circuits.

Russell shares that the choice to use AVB was a no-brainer. “But we also appreciate the seamless redundancy that P1 offers, so we always have AES and analog backup running but have never had any issues with the AVB dropping other than when we were pulling the cables out and watching the P1 revert to backup and saying, ‘Wow, cool, you can’t even tell it switched,’” he notes.

Advantages of the P1

“The P1 is an absolutely amazing tool to have in our belt,” Russell adds. “With the integration of the M1 measurement tools, it allows me to easily set up the PA any way a guest engineer might like. While we have two main positions for the PA, every artist’s needs are different.”

He then cites an example: “We just had an engineer come through that was struggling to get volume out of the vocal mics on his tour and in the morning, when he came in, we moved the PA just a couple more feet off-stage to maximize his gain-before-feedback. With the P1, that was easy; I had new timings for the room in a few minutes. Then I sat back and watched the touring SE play with Smaart for an hour before he came to the same conclusion that the M1 had recommended initially.”

“I also find the Autoclimate feature outstanding and appreciate that I can fade into the recommended changes and hear what it’s actually doing. The temperature and humidity conditions at soundcheck compared to mid-sold-out show are significant, and Autoclimate helps me maintain consistency from soundcheck to end of show, and I am very grateful for it.”

Russell expands on the success of the L-Acoustics system at Roadrunner. While many headliners bring in their own engineers, he reports that he still mixes for a fair number of the opening acts. “Mixing on this PA is amazing —it’s a beautiful rig with a room to match,” he enthuses. “The job that Scott did in Roadrunner’s design and treatment makes this one of my very favorite rooms I’ve ever mixed in. It’s a fairly dead-sounding space with just the right amount of live feel. You really get a chance to work on your mix and hear the full tails of your effects. And there is so much headroom in this rig that I never have to push the system hard.”

Russell adds, “It just comfortably and confidently delivers whatever you put into it and moves an incredible amount of air, even at low volumes, allowing us to deliver shows to our audiences with real feel and impact while still considering the safety of our guests. Basically, we can make your clothes blow in the wind of our PA all night, and you won’t leave with your ears ringing. That’s an amazing system.”

Click on “View Slideshow” on upper-right corner for images of the Roadrunner stage.