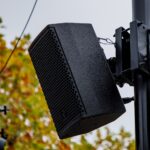 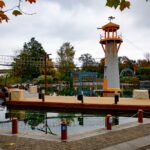 The LEGOLAND Windsor Resort, located in Windsor, UK, has continued to invest in its infrastructure amid the ongoing pandemic. The investment includes the upgrade of its 4D cinema, as well as a brand-new ride, “Ride of the Sky Lion.” This ride is considered the UK’s first flying theater attraction. The attraction also features an updated audio experience supplied by EM Acoustics’ Reference Series R10 system.

The new attraction forms part of LEGOLAND’s most recent development, “Mythica.” This area was inaugurated for the park’s reopening early this year. The LEGOLAND production team overseeing the design and installation called on long-term audio supplier and consultant Dave Shepherd, of D.S. Audio, to enhance the audio experience.

Shepherd’s brief was straightforward—namely, to design a world-class sound system for the new ride with consideration to budget and future technical expansion. Shepherd then conducted extensive research on similar installations in the U.S. in order to improve on known issues. Based on his research, Shepherd decided on an EM Acoustics system built around a core of R10s.

The ride includes a parabolic metal screen about 15 meters high and three floors of moving gondolas. This created the immersive flying experience through Mythica, explained Shepherd. “With localized scent, water spray and wind devices on each gondola, it was essential that the dynamic audio content be an integral part of that element, adding excitement yet feeling totally natural,” he added.

Read Next: The Immersive Audio Opportunity for Integrators

Shepherd’s research uncovered that intelligibility was a known problem in some similar rides in the U.S. Thus, loudspeaker choice and placement were critical.

“I recommended the R10s from EM Acoustics, as the loudspeakers’ [response], combined with exceptionally low cabinet resonance compared to similar products, ensures the audio reaches the guests with minimal disruption from the perforated metal screen,” Shepherd said.

Shepherd also noted the attraction’s highly dynamic musical score and dramatic sound effects. As a result, it would be easy for the acoustics in the environment to impair the audio content. He also observed that the ride’s building was almost a perfect cube with limited acoustic treatment. This meant that the chosen speaker had to perform the vast share in delivering intelligible audio to listeners.

He explained, “The rigging flexibility and choice of waveguides available as standard on the R10s played a key role in them becoming the obvious solution [to all of the above].”

“We used a total of ten R10s distributed behind the curved screen in such a manner that we avoided any reflections from the screen and were able to position the detailed audio exactly where it needed to be,” Shepherd remarked.

To enhance the cinematic experience of the ride, three EM Acoustics S-218 reflex loaded subwoofers were placed in a steered cardioid format at the base of the screen. This arrangement allows guests to experience the impact of the orchestral score and dramatic accompanying sound effects. A range of EM Acoustics DQ Series amplifiers completed the line-up.

Soon, work began on upgrading the LEGO Studio 4D cinema’s control system, which had been in place since 2003. In light of the success of the new ride’s audio system, Shepherd specified the same Reference Series R10 enclosures for the main L-R elements. These complemented the existing EM Acoustics MSE-159 center and EMS-81 fill speakers that were installed a few years ago to replace previous failed components of the system. In addition to the R10s, two EM S-218 subwoofers were installed to upgrade the LFE element of the system as well as rejuvenate the cinema for the modern audience.

“The flexibility of the Reference Series as well as its slim profile allowed me to position them in a more suitable place than the existing speakers to give a more natural placement as part of the 15.1 system. [It also] vastly improved sound,” Shepherd remarked.

Matt Phillips, senior project manager at Merlin Entertainments, the operator of LEGOLAND Parks, expressed pride in the new installation. He said, “[It] was apparent very early on in the process that D.S. Audio were innovative thinkers and would take care of the whole delivery from supplier liaison to design, test and commissioning. The end result is absolutely world class. [The] EM Acoustics audio system designed by Dave Shepherd at D.S. Audio is simply breathtaking and I’m looking forward to working with him for future projects.”

James Dobbs, global entertainment manager for LEGOLAND Parks, was likewise thrilled with the results. “We’ve been working with Dave Shepherd for many years now and we trust his judgement. The audio system in the new Mythica ride is nothing short of spectacular so it was a logical step to adopt a similar approach to the cinema. I’m pleased to say that the systems for both attractions have proven to be reliable, sound great and, in the case of the cinema, look great. [As] a venue operator, [this] is all you can ask for,” he concluded.

EM Acoustics revealed that audience reactions, too, have been positive. Most have described the Sky Lion ride as “amazing,” “magical” and “incredible.” Some have also described it as “the best dark ride in the country.”

Click on “View Slideshow” on the upper-right corner to see additional photos of the attraction and EM Acoustics’ audio system.