The Frost School of Music at the University of Miami in Coral Gables, Fla., has a rich history, stretching back nearly a century to the campus’ founding in 1926.

Today, it is widely regarded as one of the nation’s most innovative and comprehensive music schools.

Located within the L. Austin Weeks Center for Recording and Performance, the 147-seat Victor E. Clarke Recital Hall is a familiar venue to the nearly 700 students currently enrolled.

Used daily for recitals, concerts, and ensemble performance, the room was designed with variable acoustics by acoustician Charles Bonner so a wide range of music could be performed with optimal listening and recording conditions.

Now, to accommodate the growing interest in electronic music studies and performance, the school called upon Unreal-Systems, an L-Acoustics certified provider for installation and rental (CPi/CPr), to install a new A Series loudspeaker system in the hall.

“Normally, a venue of this size would be purely an acoustic space, but the Frost School has been moving toward using Clarke Hall for more contemporary music, including their computer music ensemble, which has a focus on electronic music production,” said Unreal-Systems project manager and lead systems engineer Ross LaBrie.

“They required a fairly robust PA option, but also requested that we not have any subs on the ground level, which meant that we needed an arrayable PA with subs over the main enclosures,” he said. 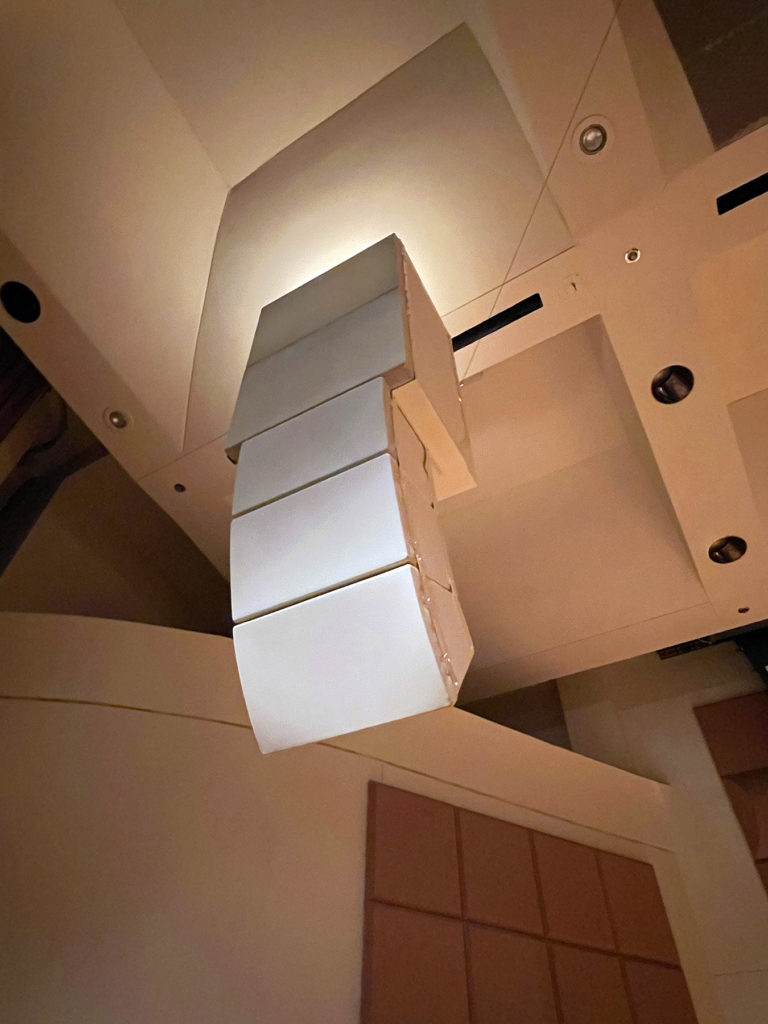 Inside the Frost School of Music Installation

The hall’s new loudspeaker system features left and right arrays of two KS21i subs over two A10i Focus and one A10i Wide, all finished and screened in a light RAL custom color to visually minimize the presence of the hangs.

An additional A10i Focus is also hidden in a ceiling cavity between the arrays to deliver centerfill coverage to the middle seats in the first few rows.

Onstage, the school has the option to deploy up to six coaxial X12 wedges for monitors, and both the monitor and FOH setups are collectively powered by four LA4X amplified controllers.

“With Clarke Hall being a somewhat narrow space, it was important to keep energy off of the walls, and the adjustable louver feature of A Series was very helpful in achieving that,” said Unreal-Systems owning partner and head systems tech James Tejada.

“By controlling the directivity of the high-frequency elements, we were, in turn, able to push more sound pressure level to the back of the room for a really smooth and cohesive SPL from front to back,” he said.

“There’s quite a discrepancy between the 10-inch driver of A10 and the 21-inch one found in the sub,” he said. “But the two marry together very seamlessly to create a system that covers the full spectrum evenly and beautifully from a very small number of enclosures.”

Few people spend as much time in Clarke Hall as Dana Salminen, who has served as Frost School’s director of production services for the past five years.

“We have a large variety of performances in the hall—ranging from solo piano, to opera, to jazz, to contemporary music—so our goal was to choose a loudspeaker system that would visually meld into its surroundings but still provide the amplification needed for such a wide range of genres,” he said.

“Our requirements were to offer reinforcement that could transparently augment a jazz performance, but still push high SPL and clarity for a rock band, or the sub-bass of our electronic music ensemble,” said Salminen.

“Since the new arrays have been in, I’ve heard many students and faculty members comment on how incredible the room sounds,” he said.

“With just a couple of small hangs and a single center fill, we get fantastic coverage throughout the space and almost no spillage onto the stage, which would normally cause a feedback disaster with so many acoustic instruments and vocals in close proximity to the PA,” said Salminen.