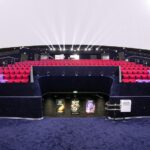 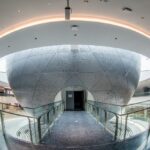 The museum is considered the world’s largest museum devoted to the celestial sciences. It is also said to echo the ‘music of the spheres’ with its bold curvilinear exterior devoid of straight lines or right angles.

An 8K Dome Theater occupies the interior of the Sphere. It hosts around 250 people for a 20-minute spectacle covering 4.6 billion years of cosmic evolution. The theater’s immersive audio system comprises 32 Meyer Sound UPJ-1P loudspeakers that encircle the 20-meter dome in three tiers.

Meanwhile, the Spacemap feature in CueStation creates the three-dimensional spatial sound trajectories. In addition, the DWTRX recording/playback module of the D-Mitri digital audio platform provides up to 64 tracks of audio program source.

The Optical Planetarium is nestled inside the Home Zone. It combines realistic recreations of constellations and planetary movements. It also has a film about nature and the universe.

Here, the audio system encircles the audience with 36 UPJunior loudspeakers on four levels. This is further augmented by four 900-LFC subwoofers for low frequency effects.

Taking the Museum to New Heights

“The Shanghai Astronomy Museum is currently the largest museum focused on the astronomical sciences in the world, and we are honored to be part of the project,” says Zhu Sihai, managing director of Shanghai Broad Future Electro Technology.

He adds, “The linear sound reproduction and immersive technologies offered by Meyer Sound help make the experience here unique and breathtaking. We expect to bring this heightened level of experience to more venues around the country.”

The museum opened earlier this year in Lingang New City in the Pudong New Area district. It is the latest addition to the larger Shanghai Science and Technology Museum.

According to a statement, The Shanghai Astronomy museum has been awarded a three-star rating in China’s Green Building System, the highest level attainable.

Click on “View Slideshow” on the right to view photos of the project.