The display integrates a medical-grade temperature sensor and is available in wall mount, floor stand standing kiosks and in sizes 7-32” with various levels of customization. The platform also runs on multiple hardware platforms, including BrightSign and Android.

Kramer Electronics’ VP−451 is a 18G 4K digital scaler for HDMI and USB−C signals. The unit upscales, downscales, and cross−scales to resolutions up to 4K@60 (4:4:4). The output resolution can be set to automatically follow the native resolution of the source or set manually to a custom resolution.
The VP-451 supports HDR10 and HDCP 2.2/1.4, features input auto–switching, constant sync on the output even if the input video signal is lost or interrupted, and a built–in ProcAmp for convenient signal adjustment. 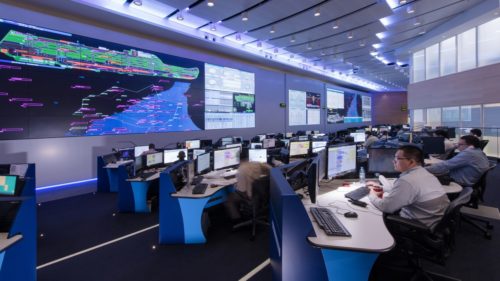 For the Zio W4000 processor, it means users can increase video wall size up to 64 displays.

This new mode of operation enables organizations to introduce new remote work and collaborative workflow infrastructures by allowing users to access, share, and control any centralized workstation located in another building or city. 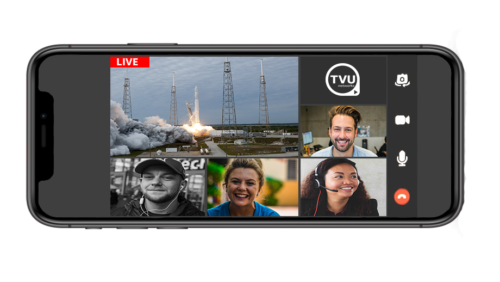 TVU Networks recently announced the introduction of Partyline, which allows call participants to achieve communication and interaction from remote locations as though they were in the same physical studio while producing live and pre-recorded programming.

Partyline enables production personnel, talent and tools to collaborate remotely in real time with full HD video quality and perfectly synchronized audio and video. Partyline is making its debut as an integrated part of TVU Producer, a cloud-based solution for broadcast-quality production, and will also be incorporated within the TVU ecosystem for use with other TVU solutions. 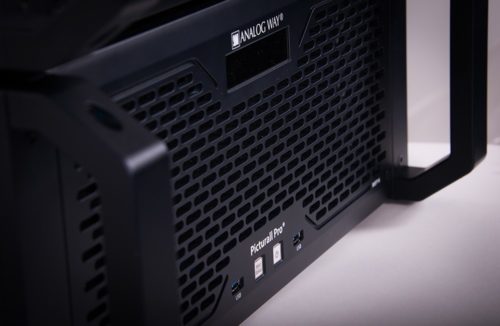 The 3.0 software version available now expands Picturall media servers’ functionalities and provides many enhancements to offer media processing, add flexibility in programming and simplify its use.

The new features include the support of cue tracking, the NotchLC video codec, NewTek NDI version 4.5, and virtual displays as well as a new web-based media manager and a free AWX encoder plug-in for Adobe Creative Cloud. 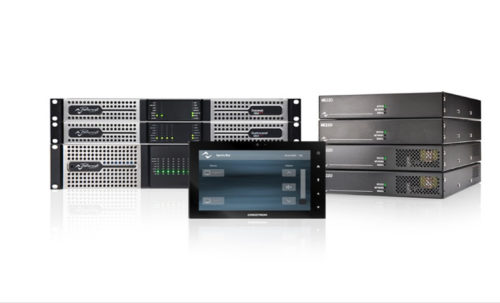 These free-to-download plug-ins allow for network-based control of amplifier functionality via third-party systems. They feature a refined, modern-looking interface, extended functionality, and a high level of user customisability, compared to legacy plug-ins for the format. 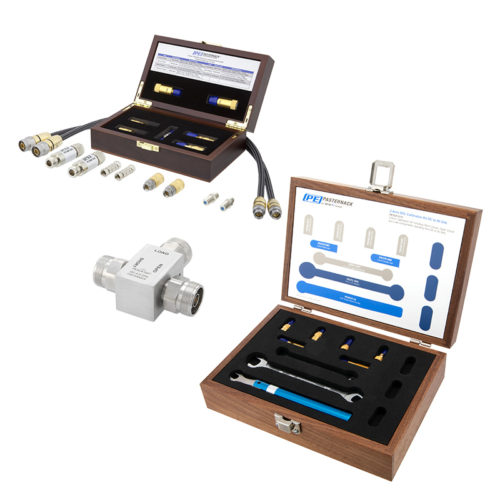 Pasternack, an Infinite Electronics brand and a leading provider of RF, microwave and millimeter wave products, has just released a new line of short-open-load-through (SOLT) calibration kits that are ideal for use in test and measurement, lab and RF & Microwave production test applications.

Each of these new VNA calibration kits from Pasternack include all of the necessary short circuit, open circuit, loads and thru (model dependent) components required for VNA calibration.

The kits are suitable for many vector network analyzers from the industry’s leading providers such as Agilent, Rohde & Schwarz, Anritsu and Copper Mountain. These RF test and measurement kits come packaged in protective wooden boxes. 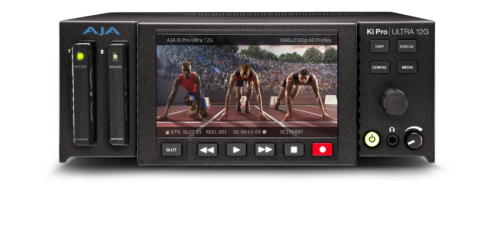 Ki Pro Ultra 12G offers single-channel 4K/UltraHD up to 50/60p recording and playback to and from Apple ProRes or Avid DNxHR, with flexible connectivity options including 12G-SDI, HDMI v2.0 and optional Fiber input and outputs.

Alternatively Ki Pro Ultra 12G provides up to four channels of simultaneous HD recording up to 1080 50/60p with independent ProRes profiles per channel.

The 62nd Grammy Awards became the first major broadcast event to utilize a large complement of Claypaky Xtylos fixtures when lighting designers Bob Dickinson and Noah Mitz of Full Flood Inc. deployed 60 Xtylos for Blake Shelton and Gwen Stefani’s duet, “Nobody But You.”

In addition, 118 Claypaky Mythos 2 fixtures were part of the main set rig and the dish stage at the Staples Center in Los Angeles.  PRG was the lighting vendor.

Lighting director Madigan Stehly designed a series of custom carts for the Xtylos, the first moving head light with a laser light source.  The Xtylos formed a pencil-beam cage of architectural positions between the duet’s verse and choruses starting with a lacy lattice look and transitioning to a straight aligned grid. 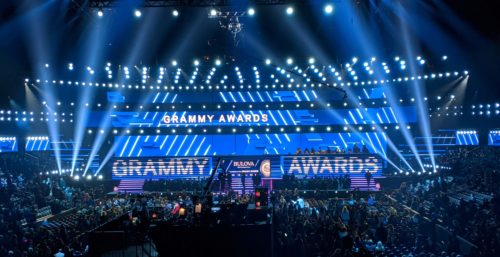 “The carts aligned the fixtures in a perfect grid, covered the joins and made everything accurate and repeatable.  Xtylos was a perfect match for that performance; they delivered on the creative beam look we were going for,” said Mitz.

The LDs chose 110 Mythos 2s for the main lighting rig where they were arrayed in ribbons above the LED video wall; they were featured in multiple performances, including the collaboration between Aerosmith and Run DMC.  Lighting director Andy O’Reilly programmed the fixtures.

Additionally, eight Mythos 2s were built into the circular perimeter of the dish stage in the middle of the audience, which hosted Alicia Keys and a tribute to Nipsey Hussle.  The fixtures were installed under glass and were revealed as needed by circular pieces of flooring material that covered the glass.

The city of Mérida in the Mexican state of Yucatán is steeped in history that dates back to Mayan civilization and still influences the city today.

Set against a backdrop of Mayan ruins and beautiful Spanish colonial architecture, Mérida’s thriving contemporary art, music, and dance scene attracts over 1 million tourists every year. At the center of the cosmopolitan city is a mecca of entertainment with numerous museums, art galleries, and theaters.

In fact, there are four theaters located a short walk from Mérida’s central square. Among them are Peón Contreras Theater, a classical opera house that dates back to the early 20th century. It required an update to its aging lighting system, but a key component was an affordable, yet simple power control panel. 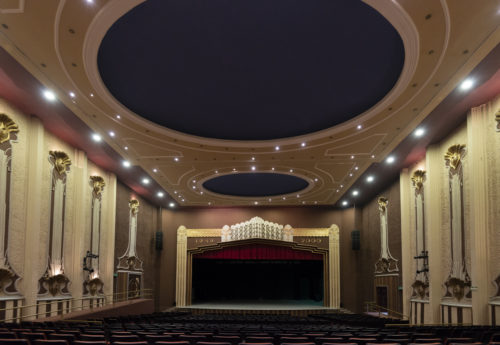 Named after Yucatan playwright and poet José Peón Contreras, the Theater seats 950 people distributed between its five levels, including the main seating area, dress circle, three levels of open-style boxes, and a gallery.

Since opening in 1908, the building has passed through a large number of restorations, renovations, and equipment updates and uses. Although it opened as a theater, over the course of its history it has also acted as a facility for a cinema, gas station, offices before eventually reopening as theater in 1984.

For the theater’s most current renovation, the idea was to bring the theater into the 21st century as a modern, contemporary-equipped, completely digital theater venue. On the lighting side, the theater was operating on fairly modern, less than a decade-old dimmers for its tungsten-based lighting system.

Aleksandar Lalicki, principal consultant and lighting designer for the project, brought in an abundance of lighting sources, including GLP X4 and Impression S350 LED moving heads. In addition, needed a system to control the new LED lights.

“The theater has around 300 events a year, and sometimes as many as four events a day,” said Lalicki. “Therefore, the staff needed to be able to quickly and reliably control the power to the lighting based on their needs.”

Lalicki specified the LynTec RPC 341 remote control breaker panel to run both LED circuits and 220-volt moving light circuits. Eliminating the complications of installing and connecting custom-designed products and a separate relay panel, the RPC delivers reliable switching capabilities and simple circuit control and monitoring for the theater in one panel.

Built on a Square D hardware foundation, the RPC panels provide additional circuit-switching control capabilities in the same enclosure. The RPC panels supports anywhere from 30 up to 84 circuit breaker positions with no increase in enclosure width.

Now, instead of having one dimmer per circuit and one plug per circuit, there’s one circuit that’s branched to four outlets to provide Peón with comprehensive circuit switching control it requires to manage and protect its LED investment.

Effective immediately, Clive Fitzharris assumes the position of managing director.  Fitzharris has been head of group strategy and development for DCC plc since 2017 and also a board member of DCC Technology.

He joined DCC in 2009 as head of development for its Energy Division, which over an eight-year period, tripled in profits and entered ten new countries.  In addition, Fitzharris was responsible for that division’s oil distribution activities on mainland Europe.

Within Exertis International, the managing directors leading the businesses across the world include:

AtlasIED this week announced the addition of three new distributors of its range of commercial audio and mass communication products.

The Summer Showcase runs from June 22-26.