Related: Digital Leader Author Erik Qualman to Tackle Transformation at NSCA’s BLC 2018
We think AV integrators have made inroads since a couple of years ago when they were smacked in the face with the realization about their struggles to market themselves, but motivational speaker Kindra Hall believes they can go even further in connecting with customers with a story —and she’s ready to tell them how at the 2018 NSCA Business & Leadership Conference Feb. 28-March 2 in Dallas.

Hall will serve as the closing keynote speaker for the event and will explain how storytelling can serve as a fast track to trust between integrators and their customers. She’ll also be part of a BLC breakout session entitled, “What Makes You Great.”

“[Integrators] have to elevate to discuss the value of what they’re offering,” she says. “Everyone talks about how they’re great at customer service, how they’re committed to excellence, how their people are the best. They all sound the same. They need to use stories to deliver that high-level value proposition.”

NSCA executive director Chuck Wilson knows that’s an area where association members have struggled and he’s excited Hall will be part of the slate for the 20th BLC after he first heard about her a couple of years ago. 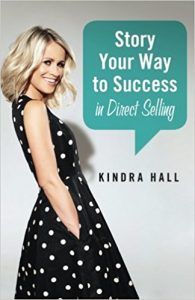 Kindra Hall’s Story Your Way to Success in Direct Selling is available on Amazon.

“We have to be technically savvy to talk to IT people but you also have to be able to show them how to apply the technology we’re installing,” says Wilson. “We were barely telling our story to stakeholders. Salespeople still want to engage in technical debate.”

Hall knows it’s tough to resist the temptation to talk about products and new technology, but she says it’s important for integrators to also be able to “communicate about your customers’ true desires” and to “demonstrate that you really understand what the customer is going through.”

“People don’t buy a thing,” says Hall. “They buy the story of what that thing can do for them. You have to offer them something more than what they already know.”

“We do a terrible job of wrapping our story around the conversation about price,” he says.

“What we do has become harder,” she says. “I don’t think we do a good job communicating our value.”