The Washington Capitals won the Stanley Cup in June and will look to make it back-to-back championships as the NHL playoffs begin this week. 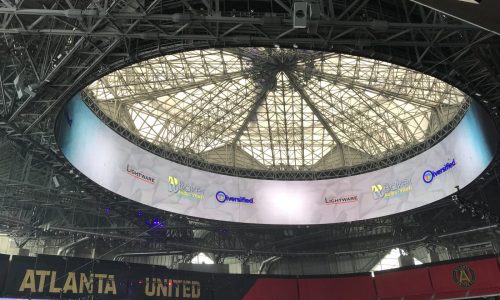 Fans who head to Capital One Arena for Stanley Cup playoff action will likely notice something else enticing when they get a hankering for some pre-game grub or an adult beverage during intermission.

Originally built in the late-1990s, Capital One Arena has undergone several infrastructure updates, the most recent of which involved an overhaul of the AV system to refresh the concession stands.

The concessionaire at the arena engaged Ping HD and BrightSign to update legacy signage at all the concession stands within the arena.

“Capital One Arena needed an AV solution that did more than just manage menu board content – they required a powerful solution that enables them to effectively rebrand the entire arena with very little effort,” said Chad Gardner, director of operations at Ping HD.

The arena plays host to a number of different sports franchises, including the Capitals, the Washington Wizards of the National Basketball Association, the Georgetown University men’s basketball team and Washington Valor of the Arena Football League.

The client’s primary concern with the AV refresh was “streamlining the process of deploying unique, team-specific video wall content and menu board digital signage at the concession stands,” according to the announcement.

The ease of managing content changes was the primary reason the client chose to implement the PingHD & BrightSign solution.

“The client required us to use existing displays,” said Joe Malouff, director of marketing at Ping HD.

“BrightSign’s low-profile players mount easily behind the existing screens, and they handle virtually any content we send their way.”

More than 100 BrightSign LS423 media players are deployed throughout the facility, connected to Samsung displays that comprise the video walls at each concession stand.