Lisa Hensle didn’t know much about AV when she joined Verrex as executive assistant to then-president and CEO Tom Berry Sr., but that didn’t stop her from applying for the ad she spotted in the local newspaper—or Berry from hiring her on the spot.

Little did Hensle, 55, know she’d still be with Verrex 28 years later, these days serving as its senior global managed services account executive after spending time in customer service after her stint as Berry’s assistant for a couple of years.

Before joining Verrex, Hensle spent four years as a household move coordinator for Exxon and worked for a real estate developer.

“I presented myself as a ball of energy [during my initial Verrex interview],” says Hensle. “[Berry’s] only concern was keeping me busy since we only had about 30 employees at the company at that time.”

As Hensle “started to get a feel for the company,” she moved into a customer service role in 1992, coinciding with the birth of her son, Steven.

“I realized I loved working with clients,” says Hensle. She later became customer services manager, then customer service administrator when CS became its own department before moving to global managed services in 2005, then taking on her current role in 2016. 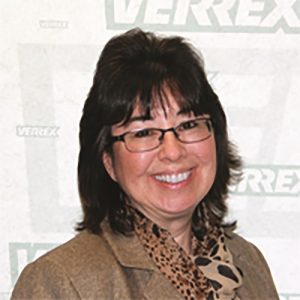 “I’ve found a home and I’m still learning new things 28 years later,” says Hensle. “They saw something in me when they hired me and I love a challenge.”

Hensle has gone through a pair of major life losses in recent years, watching her husband Fred die from pancreatic cancer in 2011 and son Steven suffer the same fate in May 2017.

Steven’s death came shortly after he had qualified for the Ulman Cancer Fund for Young Adults cross-country charity run and bike ridein 2016, but before he could participate because of his health.

Ulman Team New York had multiple teams either running or cycling across the country from San Francisco to Brooklyn (2,930 miles) this year.

Lisa Hensle served as a support driver for the related seven-day cycling event called the Key to Key 2018 with UCF from Key Bridge, Md., to Key West, Fla.(1,255 miles), delivering care packages to patients receiving chemotherapy who live somewhere along the route.

Let’s go Back Stage and learn more about Lisa Hensle of Verrex:

Commercial Integrator: You’re in an industry where a lot of people jump from job to job every few years, but you’ve been with Verrex since 1990, despite starting off as a newcomer to the industry. How does that happen?

Lisa Hensle: It’s a very collaborative environment and it’s fantastic to see how things have grown. We’ve gone from one single focus [in 1990] to broadening and expanding that today. The company motto is ‘follow the sun,’ since our offices are strategically located around the world.

CI: How do you handle the work that involves monitoring Verrex’s installed systems all around the world?

LH: There are lots of video calls. There are challenges with anything but it’s about meeting those with the strategies and tools you put into place. We do sit-downs and client reviews regularly.

CI: Is there any relation between the personal tragedies you’ve endured and your work with Verrex?

LH: Even despite personal tragedy, I have found a purpose in my life both professionally and personally. One of my favorite work life aspects is enhancing a client’s AV experience — it’s not the sale, but the relationship that truly matters.

And personally, helping others through worthwhile organizations such as Ulman to make a positive difference and spread Steven’s message of ‘strong, powerful and confident’ in dealing with life’s challenges. My son showed me you can look forward to the next chapter. It’s about doing good in this world.