For support, the concert received funds from Australia’s Warrnambool City Council from their “Activate Warrnambool” funding. This funding aimed to bring events back to Warrnambool post-COVID lockdowns. Here, 4 Wide, a popular cover band, wanted to host a free “silent” concert for neurodivergent individuals who may not be able to attend a traditional rock concert due to noise, crowds and possible overstimulation. 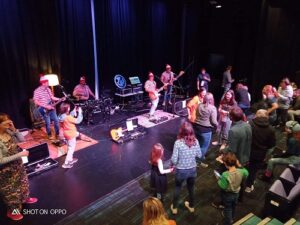 4 Wide thus chose an accessible venue with low lighting and Listen EVERYWHERE. According to the company, this is an audio-over-WiFi assistive-listening system. With this system, individuals could adjust the music experience to their comfort level.

When 4 Wide played at the sensory concert, it broadcast live audio directly to audience members’ headphones via their smartphones. The band also had iPads available to attendees who did not have a smart device. 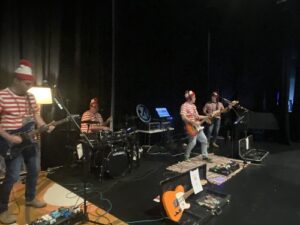 Concertgoers could choose from two audio channels through the Listen EVERYWHERE app. One channel broadcasted the concert while the other played meditation music. As a result, attendees could tune into more calming audio if a song or set by the band became too much for them.

4 Wide also provided a quiet and dim respite room for attendees who needed a break.

4 Wide posted on its Facebook page, “The main idea of our gig was to let people experience and hopefully enjoy a live rock ‘n’ roll gig that they would not normally have been able to.”

“We are honored that Listen EVERYWHERE helped 4 Wide hold a concert where attendees could engage in a shared music experience in a way that met each person’s unique sensory needs,” says Maile Keone, president and CEO of Listen Technologies. “Listen Technologies is committed to fostering inclusion with listening solutions and technologies that accommodate people in whatever way they prefer.”

4 Wide estimates 50 people, including children, attended the concert. Reportedly, one woman in her 50s drove four hours from Melbourne to attend the concert. This is because she had never been able to participate in a rock concert before.