The Canon of the Netherlands exhibit at Netherlands Open Air Museum is the most interactive history book imaginable — that is, if you have a forgiving definition of what qualifies as a history book.

“Page” after “page” of Dutch history is turned there with the power of interactive video walls and journalistic design sense.

The story starts Holland-wide: the question many cultures face of what makes it into a nationwide historical canon was posed once again by the Netherlands Open Air Museum.

A task normally relegated to textbook companies and historians was now in the hands of museum curators, content designers, and, of course, the people who bound the proverbial book: Exhibition architects Kossmann.dejong and a multi-disciplinary team of film, animation and interactive designers, Rapenburg Plaza of Amsterdam.

“We work in parallel with Rapenburg Plaza in most of our projects and they help bring our ideas to life,” says Robert van der Linde, project leader and spatial designer at Kossmann.dejong, in a press release.

“They have an expert, specialist team who work to bring all exhibition elements together in a holistic and creative way. At the Canon of The Netherlands, there is something for everyone. It’s designed to be as interactive and proactive as possible for visitors to discover so much about Dutch history and the Netherlands as an ever changing and evolving country.”

“Page” after “page” of Dutch history is turned in the Canon of The Netherlands exhibit with the power of interactive video walls and journalistic design sense.

The Canon of The Netherlands opened in September as the museum’s most adventurous exhibition to date. The creators didn’t stray from covering both the highlights and lowlights of Dutch history from the Stone Age to Today. It combines historical objects on loan from collections throughout the Netherlands with innovative deployments of the latest audiovisual and display technologies.

The Canon of The Netherlands promises to be the “most engaging and best Dutch experience for local and international visitors yet,” says art director, Pieter van der Heijden.

“The common theme is innovation, creativity and learning and Rapenburg Plaza has presented us with lots of cool ways to achieve that. Do yourself a favor and put The Canon of The Netherlands in your diary this Autumn!”

Stijn van Bruggen, project manager at Rapenburg Plaza adds that after 18 months of engineering, consulting, technical design and brainstorming, “The Canon of The Netherlands is finally ready. Our team of experts have applied a design-thinking approach which is actually a very disciplined way of knowing what technologies to integrate into an exhibit and to meet all client and stakeholder expectations.”

More on the interactive Canon of The Netherlandsfrom the press release by Rapenburg Plaza:

The first, pre-show section, consists of an entry tunnel adorned with enormous, abstract-shaped, suspended screens, that take the audience travelling backwards into the distant past, seeing people busy at their daily routines like preparing food, lighting fires, and children at play. Next, located inside a giant partially-underground dome structure, is a series of ten ‘movie set’ exhibits that mix historic objects and interactive learning through gaming, using every possible surface and space as a multimedia canvas.

This is followed by a panoramic presentation area with surrounding interactives that provide a cinematic and learning experience. Finally, an interactive learning room, with vast walls of touch screens enables visitors to participate in a learning game whilst finding out more about the history of The Netherlands.

Under the Interactive Dome

In the semi-subterranean dome, originally built in 1999 for an attraction named HollandRama and renovated for the Canon, the structure was designed to flex in response to changing weather loadings. This presented some interesting problems for the accuracy and stability of lighting and projection rigs that are focussed on exhibit elements that are attached to the building structure.

Rapenburg Plaza’s solution was to use rigid glass rear projection screens to prevent distortion and to fix the projection equipment onto rigid floor mounts that are isolated from the walls of the dome. The building may move with the wind but the projections are literally rock-solid. Whilst the projectors do not move, the eight horizontal ‘cloud’ screens that hang from the dome’s ceiling are suspended thus move together as the building flexes. 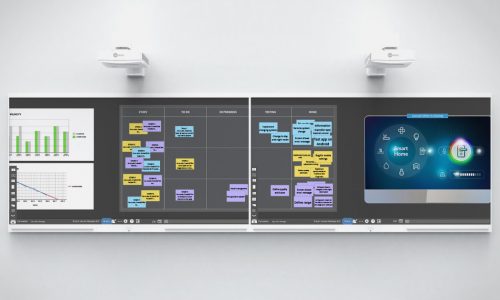 Related: Watch 5 ISE 2018 Product Introductions in 63 Seconds
Each movie is about 4 minutes long. The projected image is covered by three Canon XEED WUX6010 6000 lumen WUXGA (1920 x 1200) projectors blended through Showlogix software and replayed from a Showlogix media server. There was 5,760 by 1,200 pixels to reproduce the content at 25fps and constant bit rate. The huge panoramic images are accompanied by custom made sound.

The film soundscape was created by composer Eric Hense and audio and sound design in cooperation with IJsfontein and Redrum.

“To give the effect of audio being behind the audience, here we used six different multitrack channels sent out to 8 speakers Xilica DSPs and 7.1 surround sound,” explained audio and show control engineer Wilfred de Zoete at Rapenburg Plaza.

The interactive learning room is completely dominated by a monolithic 36 square meter wall of touch screen panels which provide visitors with in-depth coverage of the 50 topics featured throughout the exhibition. By using the unique RFID tag supplied to each visitor, their enquiries and additional reference material is emailed to the visitor at the conclusion of their visit. This is facilitated by 50 KissBox Networked RFID Readers, five for each screen. Each treasure hunt consoles utilised a further 3 KissBox RFID Readers. The Canon tabletop 32-inch browsers used a website overlay with Google maps and points of interest where subjects are displayed ensuring that visitors can zoom in, type in their own area code.

IJsfontein Interactive Media was the company who designed all interactive playful learning and gaming elements at the Canon. Raimond Reijmers, strategist and designer of interactive spaces at IJsfontein Interactive Media said: “We recognise Rapenburg Plaza in their unique approach in using technology not for making things novelty but to make the visitor experience better. They integrate light, projection, screens, real objects and décor into one living element. The Canon is made for everyone!”

To give a sense of the scale of Rapenburg Plaza’s contribution to this project, it has specified, installed, configured and commissioned:

Rapenburg Plaza leveraged following manufacturer brands throughout the Canon of The Netherlands: