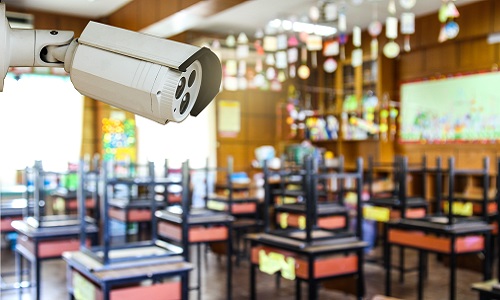 Everyone agrees that school shootings are a completely unacceptable reality in America, but we can’t figure out how to stop them.

The issue is divided along party lines, with Democrats clamoring about how guns and gun culture are the problems while most Republicans largely reject any notion of gun control and instead point the finger at mental illness.

Let me be clear: I don’t have an answer, either. It’s probably a mix of both — or maybe it’s neither. Let’s not get into a Facebook-comment-style debate in the comments, folks. I’m not a politics reporter.

Technology probably plays a role in some kind of school surveillance effort somewhere, but I don’t think it’s online surveillance.

According to the Guardian, John Cornyn, a senator from Texas, is proposing a new bill that would mandate pubic schools adopt a technology protection measure that monitors the internet activity of at-risk students.

There are already several companies operating in this space, including Gaggle, Securly and Bark, which together monitor more than 14.5 million students across some 13,000 schools.

These school surveillance companies claim their tools have helped prevent suicides, violence and more, but privacy advocates say that hasn’t been independently verified.

Schools are already required to monitor online activity to prevent the viewing of pornographic material. Should we now replace the work of a guidance counselor, teacher, friend or parent with automated technology?

The software not only monitors what students type in shared documents, but also their search history.

In rural Weld county, Colorado, a school official got an alert from GoGuardian, a company that monitors students’ internet searches, that a student was doing a Google search for “how to kill myself” late one evening.

The official worked with a social worker to call law enforcement to conduct an in-person safety check at the student’s home, said Dr Teresa Hernandez, the district’s chief intervention and safety officer.

When the student’s mother answered the door, she was confused, and said that her child had been upstairs sleeping since 9pm. “We had the search history to show, actually, no, that’s not what was going on,” Hernandez said.

If the software can help prevent kids from getting hurt, then I’m on board.

Is online school surveillance the only solution?

However, take a second to remember the conversation we all had when Edward Snowden revealed the government’s mass surveillance program. There has to be a line, and there have to be consequences for crossing that line.

No school administrator or official needs to know who is dating who, who broke up with who, or who made out with who under the bleachers.

I agree that we should fully utilize technology to prevent these horrible tragedies, but let’s consider something the AV industry is adept at: security.

There are many firms that specialize in security integration, utilizing the latest camera and monitoring technology. Couple that with the rise of facial recognition technology to alert law enforcement when someone on a watch list enters a school.

Physical security at schools should not be left out of the equation.