Imagine a 190-inch single panel video wall that is interactive, offers an uninterrupted panoramic image without seams or bezels, boasts power consumption as low as a Kureg coffee maker – and you can roll it up like a poster and bring it up an elevator. That’s the new Prysm LPD 6K Series of 100-plus-inch single panel displays.

Related: 22 Can’t-Miss Collaboration Products from InfoComm 2017
The Prysm Laser Phosphor Display (LPD) 6K Series comes in 190-inch or 135-inch single panel displays and, according to the display and visual collaboration solutions provider, is currently in general availability and shipping to partners and customers.

That customers can now have uninterrupted content on a bezel-less 100-plus-inch single panel display is significant, says Hannah Grap, VP of marketing, Prysm. Consider how important branded video content is for many customers and accurate replication is for others.

“As soon as they put it on a traditional video wall larger than 100 inches,” however, Grap says, “they have to introduce bezels [and] piecing together multiple displays to get the size for that impact. The downfall is that those bezels interrupt the content.”

“You could basically run your fingers up and down. It’s very smooth and it’s cool to the touch. It’s dark. It’s a black surface, so it looks like a real TV screen. That’s what we went for is a real look of a big monitor”

Let’s explore some reasons why the Prysm LPD 6K series is a big deal for the video wall category:

Prysm says the LPD 6K offers an immersive, bezel-free viewing experience, featuring a high fill factor and an exceptional contrast ratio of greater than 80,000:1, compared to a 5,000:1 ratio on other interactive display, resulting in striking picture quality.

“It looks like a real TV screen. That’s what we went for is a real look of a big monitor,” says Prysm founder and CTO Dr. Roger Hajjar.

Contributing to that is the LPD 6K’s reproduction of a wide range of colors in visible space, according to Prysm.

It also offers an “industry best” 178-degree viewing angle, according to Hannah Grap, VP of marketing.

“If you’re standing almost right next to the display, you don’t see color shifts. You see the image as it was intended to be presented. With a lot of other video walls, the best seats are in the front, and if you get out to the sides, the image quality starts to shift, the colors start to shift.”

Prysm contends that unlike tiled video walls based on LED and LCD platforms, the LPD 6K series has minimal color shift or change as the viewing angle increases.

As such, the display maker sees the LPD 6K line as a fit for applications across all markets, and Grap specifically highlights digital signage and workplace collaboration.

“Because the LPD 6K has a really high fill factor, highest in the industry at 90 percent, as you get closer to the screen, you don’t see the gaps in between the pixels,” she says.

“If you’re six inches away from the display doing in-person collaboration using that touch capability, you can still see the context of that content because of that fill factor.”

In fact, Prysm chose the 190-inch or 135-inch sized because it envisions that “they can fit into a conference room, but also are large enough to deliver that wow factor for a digital signage solution,” Grap adds. 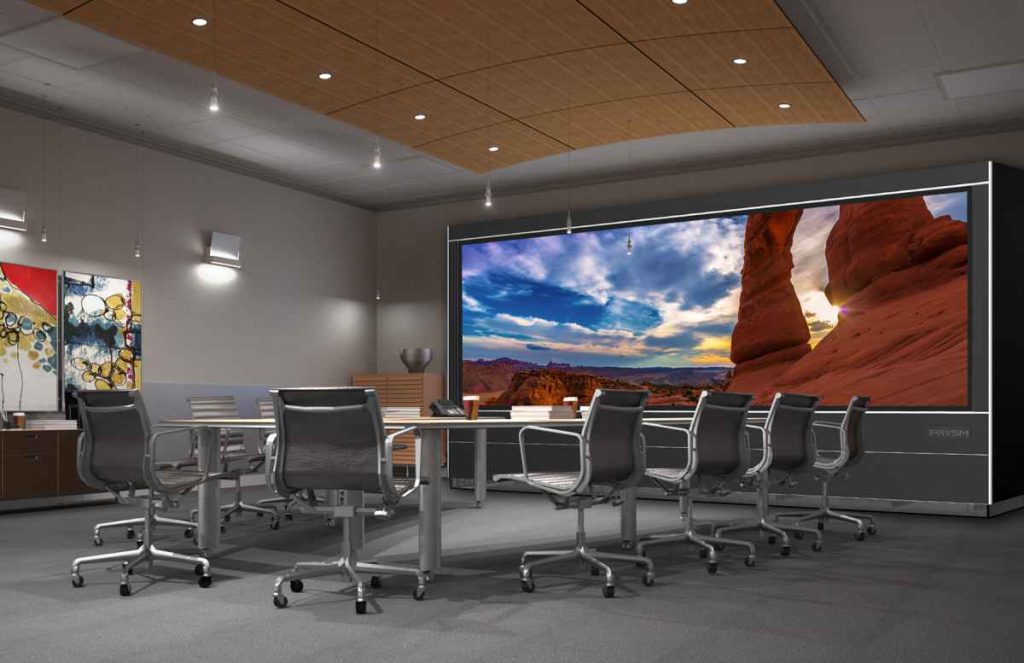 “In addition, it runs cool to the touch. It doesn’t give off heat, so you don’t have to have a separate cooling system installed in order to compensate for the heat given off by the wall.”

Meanwhile, Prysm says the LPD 6K uses no consumables and the manufacturing process does not include toxic chemicals or solvents, and uses less natural resources than other display technologies.

Prysm, however, says the modular design of the LPD 6K actually improves on those expectations with a modular design that helps speed display integration and permits installation in a variety of locations, reducing down time and total cost of ownership.

“The 190-inch single panel opens up like a garage door, [allowing parts to] be removed and replaced from the front to reduce the down time,” says Hannah Grap, VP of marketing.

“This is a solution that it is completely serviced from the front,” Grap says.

“The 190-inch single panel opens up like a garage door, [allowing parts to] be removed and replaced from the front to reduce the down time [and to get it] up and running really quickly.

LPD 6K also delivers high reliability, according to Prysm, and is guaranteed with its lifetime panel warranty.

“LDP is the only technology that has active monitoring of the lasers and the color and brightness over life, and that is very important in a large display,” adds Hajjar.

“We maintain uniformity to two percent actively, and we would, if something would happen to a laser, we would notify or raise an alarm, and somebody would come in and swap the light engine.”

A key feature of the Prysm LPD 6K Series is its built-in interactivity with more than 30 simultaneous touchpoints. That can be complemented with available Prysm Application Suite visual collaboration platform, which consolidates applications, content, video conferencing, and the web into a touch-interactive workspace. 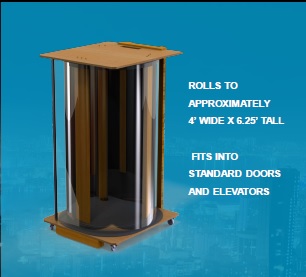 m LPD 6K Can Be Rolled into a Cylinder

Installers that have experience struggling to bring video walls or large panel displays into projects will be particularly interested in the Prysm LPD 6K Series 190-inch or 135-inch single panel displays’ durable front screens, which are made of a specialty coated polycarbonate layer, allowing them to be rolled into a cylinder for easy transport.

Think of it – a 190-inch single panel can be rolled up almost like a poster and brought through a typical door or into a Manhattan building elevator.

“We have just installed the 190-inch single panel display on the 18th floor in the middle of Manhattan,” Grap says.

“You can imagine trying to get a single pane of glass into that video wall space. We’d be shutting down roads, disrupting the city for a good part of the day with cranes and whatnot, but because this uses a different surface, it’s completely rollable to as small as 36 inches in diameter. It can fit through a standard doorway into a standard elevator.”