When SMC³ hired Baker Audio Visual to handle its technology needs in its new corporate headquarters in Atlanta, the CEO told Baker AV project executive Jacob Dylan and his team that he wanted attention-grabbing displays that would communicate the transportation technology company’s messaging to employees and visitors, while providing the optimal user experience.

Dylan knew that sort of impact would only be possible with SNA Displays direct-view LED displays—and he wasn’t shy about telling SMC³’s team. After all, SMC3 has been a Baker AV customer for more than a decade and has trusted them to do projects in several locations at least once a year since.

Unlike some other straight installation projects, Baker AV staff was involved with the SMC³ HQ job at the design phase and that made a big difference for the good of the project, says Dylan. The three-year process culminated with a soft opening in mid-July and a grand opening slated for later this summer.

“I’d rather have a conversation that talks about the vision and what you’re trying to accomplish and the kind of impact you’re trying to make rather than focusing on trying to sell a particular piece or brand of equipment,” he says.

“Because we were brought in so early during the design process, we were able to design architectural components around the technology in some cases, not the other way around,” says Dylan. That includes thinking first about the layout of the video walls in the training room rather than jamming them in later.

“Being involved early allowed us to get far ahead of the game about the vision,” says Dylan. “It let us talk about the space and how it was going to function.” 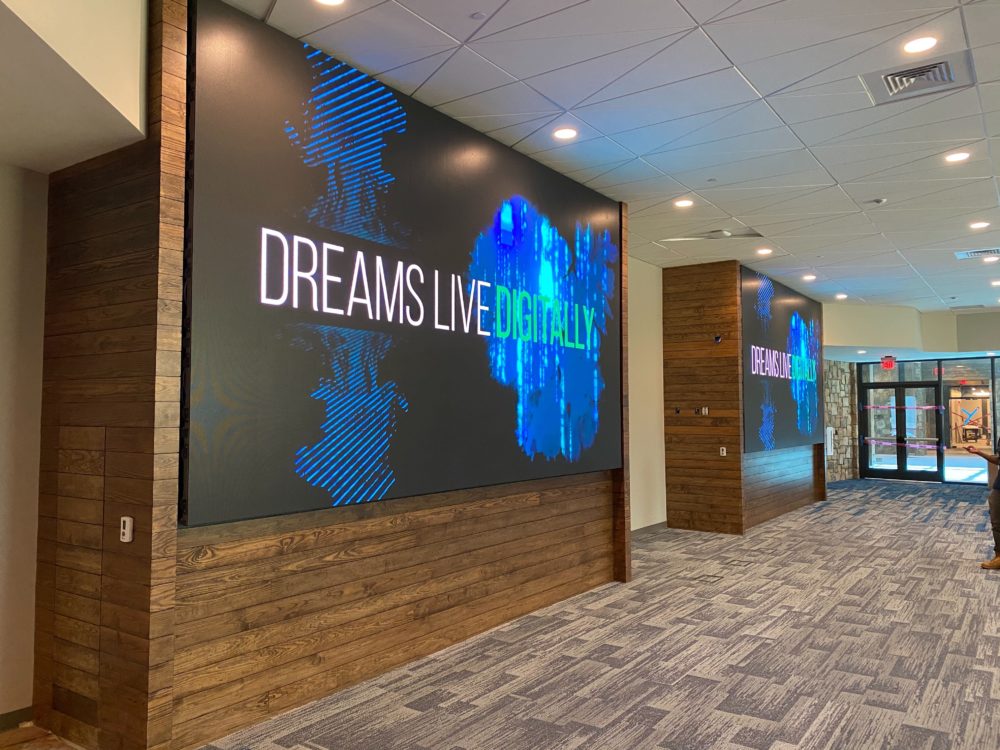 The SNA Displays video walls in the new SMC3 corporate headquarters training room—one each on the left and right sides of the room—will be used primarily as a resource to train the current and future generations of SMC³ employees and customers on new products.

The main reason SMC³ chose SNA Displays direct-view LEDs for its new video walls is they wanted a high-quality system that would support their needs into the future, says Dylan.

“In most every corporate setting, anybody can see a large-format projection screen or large-scale video wall,” he says. “They wanted something that when people stand in front of it, they’re captivated by it.

“We lead with (SNA Displays) for just about everything,” he says. “Baker is a super family-oriented company and SMC³ is part of our extended family. When you get someone you really care about as a customer, you go with a company you really trust.”

SNA Displays products come with tangible benefits such as their quality and functionality, says Dylan, but there are intangibles such as pre-delivery calls with SNA Displays’ technical team about upcoming shipments and how to operate the displays they contain that make them even better.

“You can buy any product from anywhere,” he says. “I’m just here to help educate you and shepherd you through the process. Chances are my recommendation will be right. I just want to educate you on the why.

“A big part of the process for us is having that kind of relationship with our customers and bringing them that knowledge base,” says Dylan, noting that’s how many customers first become familiar with and come to rely on SNA Displays.

“As far as color correctness, quality of picture and workmanship, they’re the best I’ve seen in my career. Then you put an entire team behind that to ensure successful implementation, including doing their own drawings,” says Dylan.

Those who aren’t familiar with the SNA Displays brand don’t need to do much research to find out what they need to know about the company’s reliability.

“If you question how much they’ve been proven, go to Times Square,” says Dylan. “Over 90 percent of the displays there are SNA.”

Dylan also likes that SNA assigns project managers to installations that use their products, saying that sort of collaboration and oversight “is a massive variable for us.” While he’s yet to run into major issues, having a team of internal engineers available if they come up is another checkmark for SNA Displays, he says.

“They’re not two-stepping a product and rebranding it,” says Dylan. “They actually manufacture their own products. Once I paint the full picture for a customer, it sells itself.