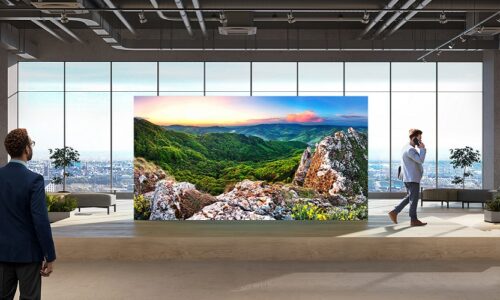 According to the company, the BH-series offers high brightness and a wide color gamut, and the CH-series provides “unmatched black levels” to give customers new versatile options that fit their needs and budgets.

Sony says the BH-series has a high brightness of 1,700 cd/m2, which the company says is more than double that of other high-end LED displays. The CH-series offers 1,300 cd/m2 and a black level value that Sony claims measures at approximately 1/10 of competitive LED displays.

According to Sony, the displays’ X1 for Crystal LED image processor enhances content to ensure smooth imagery, crisp and accurate pictures and clear gradation without motion blur. This is a result of the processor’s built-in features; 22-bit Super Bit Mapping, Reality Creation and Motionflow.

As a modular solution, customers can choose the size and resolution of the display. The BH- and CH-series feature super fine LEDs and a unique coating, to achieve a wide viewing angle without unnatural color shift. The new models come pre-assembled and calibrated to ensure a seamless appearance.  A future firmware update will enable additional uniformity through auto color adjustment, the company says.

The displays’ cabinets are about 10% lighter than 10% thinner than current models, making them easier to install and integrate. An easier on-site assembly results in an installation time that is about 20% faster than previous models, and high-efficiency LED chips help reduce power consumption by about 25%.

“Our Crystal LED displays continue to be the gold standard,” says Rich Ventura, vice president of professional display solutions at Sony Electronics. “With the launch of the BH- and CH-series, we’ve made Crystal LED more accessible by giving our customers cost conscious options that inherit similar premium image quality, grandeur and dependability along with increased installation flexibility.”

Another version of this article originally appeared on our sister-site My TechDecisions on January 25, 2023. It has since been updated for Commercial Integrator’s audience.