Operating in more than 200 countries across the globe, Western Union is considered by many to be a global leader in cross-border, cross-currency money movement.

The company’s history of innovation goes back to the 1800s, when it helped forge the world’s communication infrastructure into a unified and efficient telegraph system.

More than 100 years since its inception, Western Union is still helping to move money, from small businesses and global corporations to families to non-government organizations in the most remote communities on Earth.

Western Union prides itself on “helping to grow economies and realize a better world.”

As it continues to develop new ways to send money through digital, mobile and retail channels, Western Union officials are determined to stay on top of technological innovation and Avocor information displays are playing a key role, enabling employees all over the world communicate and collaborate.

Tom Oriel, Western Union’s IT manager for messaging and AV, has been instrumental in bringing the power of Avocor displays to work for Western Union.

“Employee collaboration is a top priority for us,” says Oriel. “As an international company, it’s difficult to work hand-in-hand with co-workers when you haven’t met them, but Avocor is really helping bring us all closer together and work at peak efficiency.”

Western Union has Avocor displays with Intel OPS compute running Microsoft 365 in every conference room, huddle room and some executive offices in Denver, with more than 300 displays between its two buildings.

“Being able to put a face to the name is great and fosters comradery and teamwork,” says Oriel. “We have integrated the Avocor collaborative displays in every part of the business.”

Western Union currently has Avocor displays installed in regional offices in India, Manila, Singapore, Costa Rica, Hong Kong, Lithuania, New Jersey and San Francisco and plan to install them in all of their offices around the world, says Oriel. 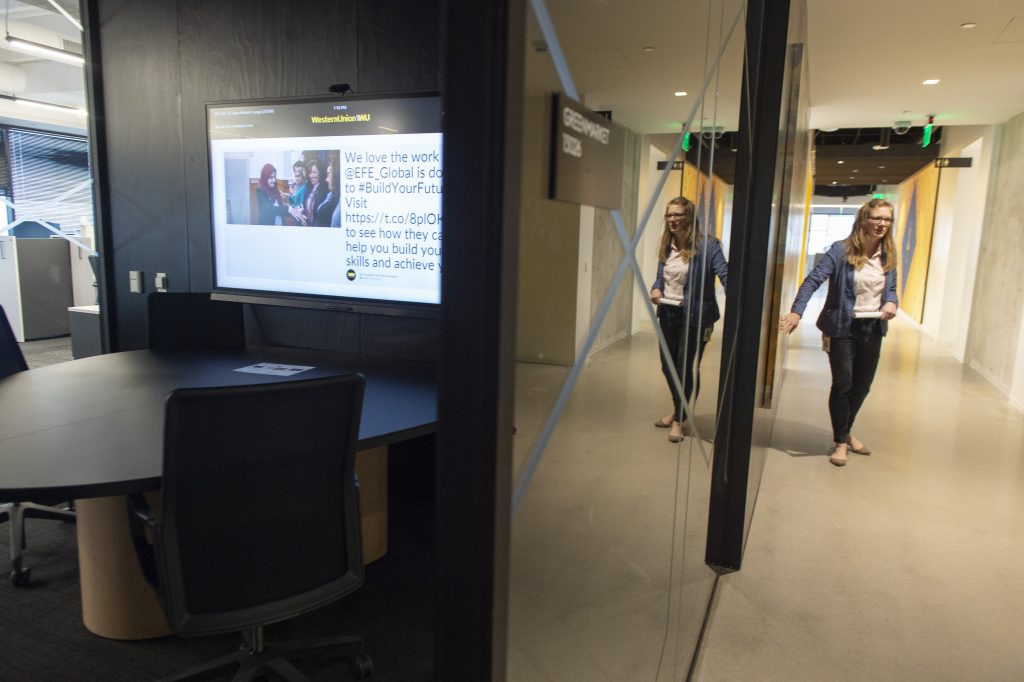 One of the challenges Western Union faced with screens is the Denver offices are designed with the windows facing the screens, which created a glare, but the matte finish on the Avocor displays minimizes that.

Because both Zoom and Huddly are Avocor strategic partners, the software and hardware had been tested and optimized to work together.

The new display setup has also solved one of the most nagging problems of collaborative meetings in the past: having meetings start as expected and function, says Oriel. Western Union has seen real improvement in employee efficiency, creativity and teamwork.

“You see more people than ever standing by the screen working together, and now that’s shared across all the international offices,” says Oriel.