Emerging technologies that combine reality with virtual environments are making a breakthrough across many applications. Extended Reality, or XR, is the term used to describe this blend of technologies. It is one of the most exciting developments in film, television and real-world applications where virtual and real worlds combine around the talent. The goal of these immersive environments is to allow the talent to feel as if they are in a new world, beyond what has been possible before.

XR creates a new environment through an immersive experience that enables the on-stage talent to react to the content. XR has been used by musicians, such as Katy Perry, Billie Eilish and Blink 182, and special events including MTV Video Music Awards, America’s Got Talent and Game of Thrones.

Disguise, Lux Machina and Fuse Technical Group are at the forefront of creating high-profile Extended Reality experiences for many of the world’s most popular video and music productions.

“We work with two different clientele that create various concepts for capturing content, including virtual product and virtual set extension,” said Anthony McIntyre, technical solutions specialist for Disguise. “Virtual production is geared towards cinematic and television. We are utilizing large LED displays to capture camera graphics at a large scale. The other area, virtual set extension, serves broadcasts, commercials, corporate and music industries. Disguise’s purpose is to act as a platform that incorporates multiple pieces of third-party technology, including Lightware.”

“Hypothetically, if a Disguise server fails, we can send commands directly to a Lightware switch to modify outputs and ensure there’s not a loss in content,” noted McIntrye. “It enables us to have a constant stream of content to the destination. Lightware is a phenomenal tool for that. It keeps its fidelity, high-robustness and integrity along those paths.”

Kristoper Murray, chief technology officer for Lux Machina added, “We are utilizing Lightware as the heart of our video systems. Lightware enables us to reliably send signals from point A to B. We integrate Lightware heavily within our control systems to create a transparent solution for the user. We can’t have failures in these situations, especially in live broadcasts. We continue to utilize Lightware because we haven’t had any major failure during the course of an on-air production.” 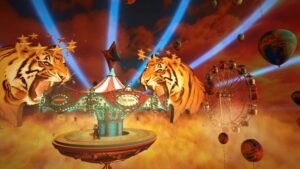 Mike Ruddy with Fuse Technical Group has been using Lightware MX Matrix Series for over 15 years. Fuse Technical Group has relied on Lightware in many recent projects, including Billie Eilish’s “Where Do We Go” – The Live Stream and Katy Perry’s Singles Day. “The quality of Lightware’s technology has kept up with the changes in technology and resolutions,” said Ruddy. “Their resolution management is incredibly important to us. Resolutions are skyrocketing right now and there are so many custom resolutions. We can go onto a project site with confidence knowing that the resolution we are going to be fed from the content side can be processed through the routing system.”

Ruddy added, “The best compliments that we could receive from any of our clients is for them to say ‘Oh, there was a problem? I didn’t even know it.’ There’s always going to be a chance of something happening in the background, because that’s part of a live production, but the client and the audience should never know it. That’s part of the magic and that’s where Lightware helps us. The customer doesn’t see it and the show goes on.”

Since 1998, Lightware has been developing matrix switchers, signal extenders and accessories for the professional AV market. Lightware provides unique advantages to integrators and end-users by combining a built-in video frame rate analyzer, cable diagnostics and an open API for higher level management and monitoring systems.

“At Disguise, we have a very high standard of production that we rely on and because of that, we try to work with the best products and the best technology,” said McIntrye. “Our technology is utilized to harness video to tell a story. Lightware allows us to do our best work and do it seamlessly. They’re our failsafe to make sure our project goes along without a hitch.”

Murray added, “Lightware allows us the flexibility in their wide range of products. It enables us to service a wide range of clientele, from live broadcast and entertainment to film and episodic. Lightware has technology that supports us in some of the most difficult situations. This is incredibly unique and difficult to find in other vendors.”