For more than 170 years, the fate of Sir John Franklin and his attempt to establish a sea route through the Northwest Passage, has been wrapped in mystery. But now the Franklin Expedition exhibit at the Canadian Museum of History reveals a wealth of information gleaned from the expedition’s two ships — with the help of a Casio 4K projector.

The HMS Erebus and Terror were located in 2014 and 2016 with the help of the Inuit people.

“’Death in the Ice’ is a fascinating exhibit,” says Jean Couture, AV Specialist at the Museum.

“You get a sense of what these 129 men lived through, how they spent months stuck in the ice, unable to send for help – it really sparks your imagination.”

Along with 63 artifacts from the Franklin expedition, including dishes, tools, naval hardware, letters home and notes left for future searchers, are photos, paintings, ship models and a number of audio and video exhibits, including a huge, strikingly beautiful animated map projected in 4K using a Casio XJ-L8300HN laser projector.

Why the Casio 4K Projector?

Couture says he chose the Casio based on a combination of features, price and performance, plus the Museum’s five-year experience with Casio LED/laser hybrid projectors.

“The quality of the product is very high, and Casio service has been amazing.”

Couture is responsible for the exhibit technology used by both the Canadian Museum of History and the Canadian War Museum, located directly across the Ottawa River in Ontario.

He has been buying Casio LampFree projectors for both museums since 2013 and now has more than 40 in his inventory.

“We put them in a wide variety of temporary and permanent exhibits,” he explains.

“The image quality is high, they hold up well after thousands of hours of use, and it’s a no-brainer to avoid the cost and hassle of replacement lamps.”

Color consistency is key to ‘Death in the Ice’

“With bulb-based projectors, not only were we constantly cycling through lamps, but you’d look at an image, then turn around and be struck how the same projector, mounted 30 feet away, could give you completely different color.” 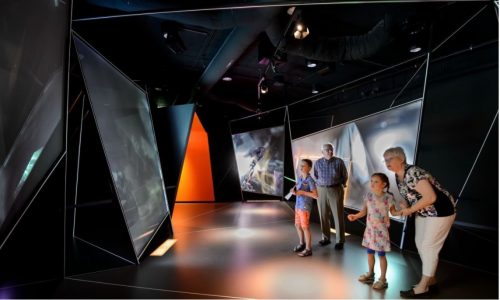 The problem, he says, is that the color produced by lamps will shift as they age, and their high heat can also cause degradation of the projector’s image-producing components.

Couture tells a story where, because of an unnoticed problem with a control system, six Casio XJ-M240 projectors were left on 24/7 for about three years.

“We had been wondering if they would really last the 20,000 hours promised, but here we had roughly 26,000 hours with no sign of a problem.”

He notes, too, that he saw no reason to retire the projectors once he discovered the problem. All six are still in inventory.

In another case, a projector failed at 21,000 hours, outside the 10,000-hour limit of the warranty, but well within its five-year term. Casio decided to replace it at no charge.

Given these experiences, it only made sense to consider the company again when he needed a high-res option — so a Casio 4K projector was chosen for the “Death in the Ice.”

Presenting The Puzzle of the Franklin Expedition

One of the most intriguing aspects of the Franklin expedition story is the mystery of its ending.

Although the ships were packed with food, the crew felt compelled, after 18 months in the ice, to try a trek to safety. Over the next 32 years, the British Admiralty launched more than 30 expeditions to try to learn their fate, but they found few traces.

“Death in the Ice” includes a detailed, animated map that shows the hoped-for Northwest Passage, the progress of the failed voyage, the rescue attempts and other explorations.

To show it, Couture and his team decided to create a 14’ image using the Casio 4K projector.

“We wanted to show fine detail in a very large format, and we wanted people to be able to walk right up to the map without noticing the pixels,” he explains.

Related: 16 of the Most Impressive Projectors, Converters and More from InfoComm 2018

Couture says he first considered another projector costing $56,000, but then discovered the Casio XJ-L8300HN, available for less than a seventh of that price.

He and his team ceiling-mounted it, focusing it onto a wall painted with Screen Goo high-contrast material.

The decision to purchase the Casio, he says, was based less on its cost than its sharpness, color rendition and ability to meet the requirements of the exhibit.

“It’s 5000 lumens, has lens shift, HDBaseT and Crestron compatibility, everything we needed,” he explains.

“There were some others getting into the price range but from manufacturers that we’ve either never used or had problems with in the past.”

Given the museums’ track record with Casio, the choice was obvious.

In addition to the Casio 4K projector, Couture is using a smaller Slim Series LED/laser hybrid in another part of the exhibit.

His team set it up to project images through the lens of a replica magic lantern. “It’s perfect because of its size,” Couture says.

So far, he adds, both the 4K laser and the LED/laser hybrid have performed flawlessly.

“We did discover that we needed a firmware upgrade for the laser, to work with the latest Crestron controller,” he recalls.

“I was expecting to do the upgrade ourselves, but Casio sent people from their service center in Toronto and just took care of it.

“How many companies would be willing to do that?”

“Death in the Ice” Franklin expedition exhibit runs through September 30, 2018.