There was no such thing as projection mapping in 1885, when the Old Galt Post Office was built in Cambridge, Ontario. In 2018, however, when the historic site was transformed into a digital library it did so in spectacular fashion added by a 20-minute projection mapping show delivered by Westbury National services and Christie technology.

Times change, as reflected by the role of the building. The projection mapping show was designed to punctuate that evolution.

The process of creating the projection mapping event began in late 2016 as Cambridge officials and Westbury began work on a permanent installation to projection map the façade of the Old Galt Post Office, according to a Christie press release.

John Coniglio, senior account representative, Westbury National, has been at the helm of the project from day one, including directing the content creation. “I had a vision of what I wanted to accomplish with content, having been involved with many projection mapping projects. I really wanted to ensure we met the client’s needs and created a showpiece.”

Inside the Christie Projection Mapping Technology

Related: The Projection Mapping on Vancouver’s Cambie Street Bridge Was Striking
“We’ve worked with the Boxers before. We did another permanent installation of 18 Boxers for the Colorado Avalanche, and we wanted to continue that product choice because we knew we could rely on it,” says Coniglio.

Coniglio notes serviceability was another key factor in their choice. “Christie provides Westbury with amazing support allowing Westbury to offer the same level of service to our clients that are purchasing high tech projects like this. Location of the manufacturer is key. The fact that the installation is in Cambridge was an added bonus as support from Christie was only half an hour away.”

Christie’s engineering and design centre is located in Kitchener, Ontario, north of Cambridge. 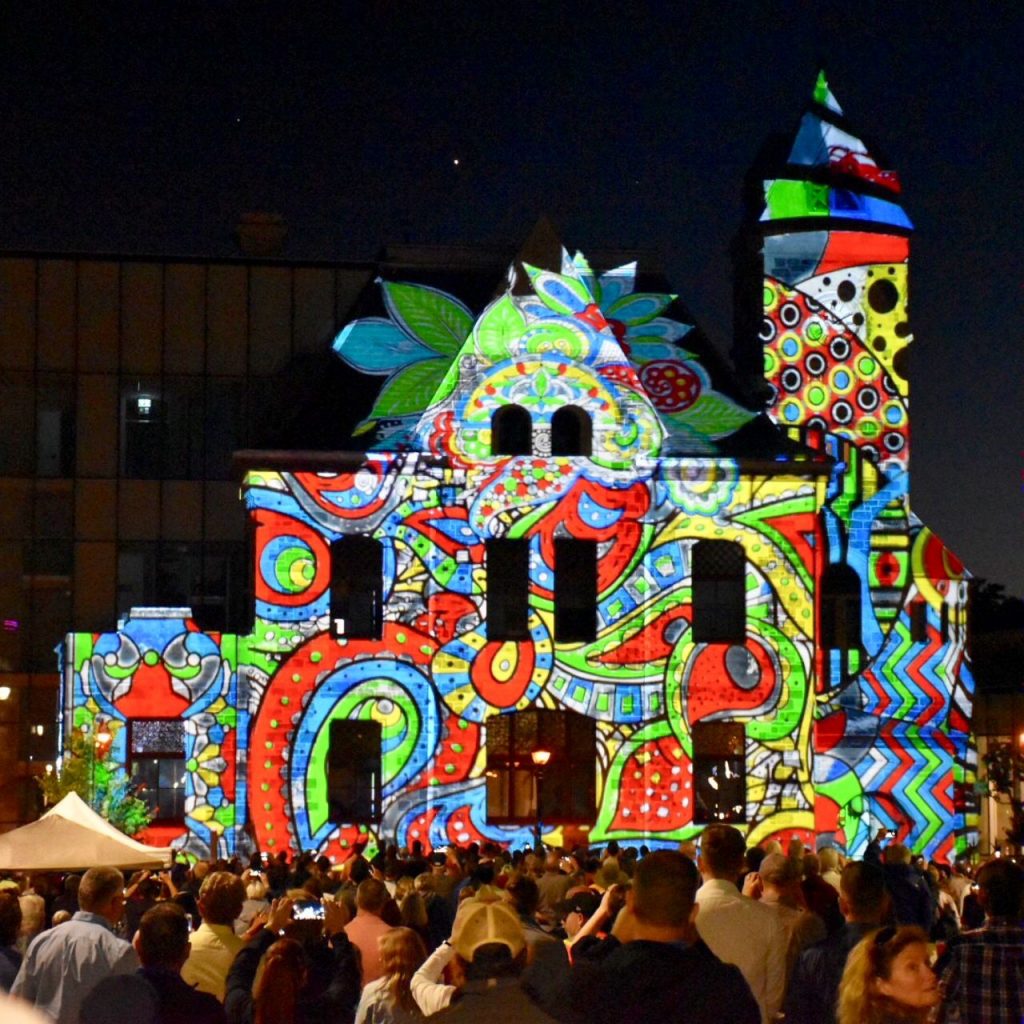 Inside the Design and Installation

Projector placement was the biggest challenge of this permanent installation, according to the Christie press release. With only a parking lot across from the new Digital Library, there wasn’t a building where projectors could be installed.

Projector placement was the biggest challenge of this permanent installation. With only a parking lot across from the new Digital Library, there wasn’t a building where projectors could be installed.

Westbury worked with city officials to design an appropriate structure and assisted with contracting the installation of a concrete pad for the structure. Once the structure was completed and erected on to the concrete pad, the custom projector enclosures were lifted 16 feet to the final resting placement on the structure, complete with electrical.

Coniglio notes that, in the end, “it was a straightforward installation.”

The show went live on July 6, 2018 and, according to Christie, the response has been outstanding.

“Technology wise, Westbury is very good at what we do, so we were confident we could get the projection system up and running,” says Coniglio.  “Content-wise, when showing the content committee some of the first drafts, their first reactions were ‘yes, you guys got it.’ That was the biggest compliment because it proved we understood their vision and translated it to the projection mapping show,” says Coniglio.

Undertaking this project required a team effort from Westbury National, from installing the projectors, to creating the original content that’s projected during the 20 minute show.  Says Coniglio, “I can’t do what I do without a great team. And that team consists of great projectionists, great content creators, and being able to deliver on-time and on-schedule.”

The Projection Mapping on Vancouver’s Cambie Street Bridge Was Striking