Chicago Cubs fans waited 108 years between World Series championships, so it’s no surprise their fans were eager to buy every bit of merchandise commemorating the seven-game series after it ended in early November.

And, in a bit of unbeatable timing, the Cubs opened a new flagship store just outside Wrigley Field shortly after the elusive title had been captured in the fall. The store is part of an 8,400-square-foot retail space that opened just before the Cubs opened the 2017 season with a long-awaited World Series banner-raising and ring ceremony at their historic ballpark. 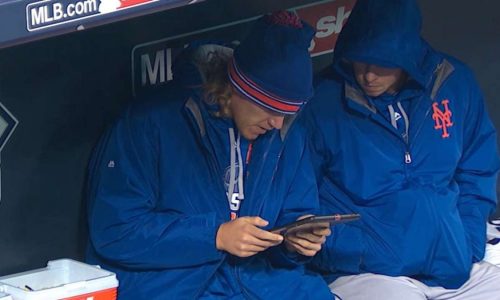 Planar and Leyard are right in the middle of all the festive action, with a 4×4 Clarity Matrix LCD video wall installed on a radius wall over a staircase at the new flagship store, which boasts traditional Cubs merchandise, autographed balls and jerseys and upscale apparel.

“With that installation, the Cubs’ top priority was an ultrathin bezel,” said Curtis Walker, technology director of Dimensional Innovations, which performed the integration of the displays at the team store.

When tiled together to form a video wall, the Clarity Matrix offers a tiled bezel width of 1.7mm. Also featuring 800 nits brightness, LED backlight technology and Full-HD resolution per display, the Clarity Matrix video wall “provides a high-impact viewing experience—ideal for live game feeds, which are displayed on the video wall during both home and away games,” according to a press release about the installation.

The installation of the 4×4 Clarity Matrix video wall presented a challenge due to a difficult mounting location (on a radius wall over a staircase that leads to the store’s second floor) as well as a tight timeline. Leyard and Planar installation specialists came to Chicago to help finish the project.

The Cubs also wanted to provide fans and visitors with a unique, interactive experience at the store, so they collaborated with Dimensional Innovations to create an augmented-reality green screen featuring a Planar UltraRes series 86-inch 4K LCD display.

The green screen “offers fans the opportunity to create high-resolution pictures of themselves in famous Wrigley Field scenes, such as inside the Wrigley Field scoreboard, behind home plate or in the ivy of the outfield wall,” according to the announcement.

A 22-inch Planar LA Series touchscreen display is embedded in a kiosk next to the photo booth to make it easy for fans to e-mail photos to themselves.

The retail store also features a second Planar UltraRes Series 75-inch 4K LCD display that is used for digital signage within the store.