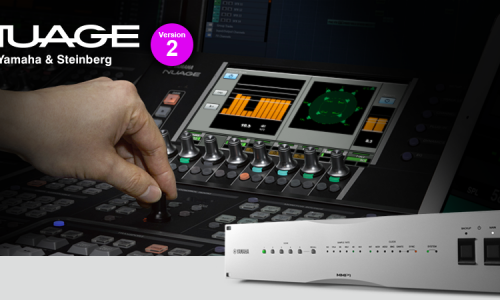 Yamaha Professional Audio will show off the version 2 update of its NUAGE DAW software and hardware control among several new products and updates during the NAB 2018 Expo (booth #C1725) in Las Vegas this week.

NUAGE is “a unique fusion of DAW software and hardware control that is rapidly gaining acceptance in a wide range of professional applications, from audio post-production to music recording and production,” according to the Yamaha press release.

NUAGE “not only improves day-to-day efficiency and productivity, but also enhances output quality,” according to the announcement.

The NUAGE Version 2 update is “an innovative solution that delivers significantly enhanced DAW software and hardware control and monitor processing for a broad range of applications,” the Yamaha press release says.

The Version 2 update “reinforces the system’s monitor and communication capabilities by providing tight integration with the Yamaha MMP1 studio monitor management system,” according to the company announcement.

“While primarily focused on monitor control, MMP1 is an exceptional tool offering a comprehensive range of audio processing capabilities that are essential in the modern studio environment,” according to the Yamaha press release.

The MMP1 is “an ideal monitoring, communication and processing solution for audio formats from basic stereo to complex immersive surround,” according to the Yamaha press release.

The Yamaha MMP1 can be used with just almost DAW or peripheral, but with NUAGE Version 2, adds remote DAW software and hardware control capability so that source selection, levels, downmix and dimmer switching, talkback and other functions can be controlled directly from physical controls on a NUAGE Master or NUAGE Fader unit.

Because these functions can be accessed even when there is no computer or DAW online, monitor section operation is as direct and immediate as on a mixing console.

Other New Yamaha Releases at NAB 2018

Yamaha will also exhibit two new Dante-equipped I/O rack units for its professional audio lineup: the Rio3224-D2 and Rio1608-D2. Together with the newly released CSD-R7 control surface, the I/O racks are components of the RIVAGE PM Series, including the new RIVAGE PM7 digital mixing system.

Both units can be used with current CL and QL Series digital mixing consoles.

Yamaha firmware Version 4.5 for the industry-standard CL and QL Series digital mixing consoles will provide support for the new Rio3224-D2 and Rio1608-D2 I/O racks and the Audinate Dante domain manager.

Click here to get the NUAGE Version 2 update free.