There were a few things that jumped out at me when I looked more closely at CI’s 2019 Integration Market AV Demographics: A Surprisingly Invasive Survey—but they might not be what you think.

In fact, count me among the almost 25 percent of AV demographics survey respondents who were at least a little bit offended at some of the probing questions editorial director Tom LeBlanc asked in the survey.

I’ve addressed my concerns with Tom and we’ll continue to work together but, man, was I offended. 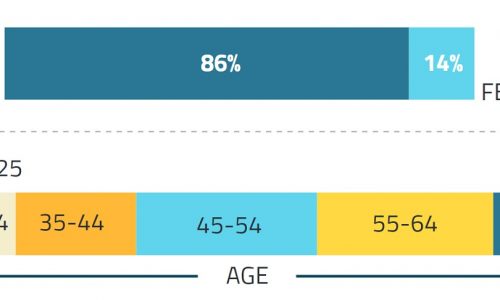 Let’s start with the question, “Do you prefer beer or wine?” Apparently, Tom hasn’t been around me often enough in social situations to know I drink neither one and my alcoholic beverage of choice is—and always will be—a Cuba Libre, better known to you beer and wine snobs as a rum and Coke.

I’m just glad he didn’t ask whether my favorite kind of rum is Captain Morgan [the gross spiced stuff preferred by pirates] or Malibu [the coconut-flavored versions made for those who chose the beach as their top vacation destination].

I’m Bacardi for life—and please don’t make my Cuba Libre with no lime.

Tom also listed a handful of “classic” TV shows and asked survey respondents to choose one of them as the best of all time. Clearly, we need to re-educate this man on pop culture because he inexplicably left out the undisputed champ, “South Park.”

Maybe Tom himself is offended by hearing cartoon versions of elementary school students cursing at those in “authoritah” or maybe he just doesn’t have any taste. I’m guessing the percentage of those who were offended by the survey would have spiked if “South Park” was included on the list though.

Given the options, I would have gone with “Seinfeld” but see if you can make it through a “South Park” episode without laughing once, even if you’re laughing at how offensive the dialogue is.

I’ve never seen an episode of Game of Thrones, Breaking Bad, Mad Men or The Wire, for whatever that’s worth. [Tom would probably say I’m too busy watching cartoons since “The Simpsons” is another of my favorites].

Surprises from the AV Demographics Survey

In addition to being offended by some of the questions in our demographic survey, I must admit to being legitimately surprised by some of the results. I didn’t realize so many of our readers own guns, so that’ll make me think twice about saying no to their requests in the future.

I also was actually surprised that more than half of our survey respondents consider themselves religious. I guess that’s colored by my own experience when it comes to religion as someone who grew up going to church every Sunday—not always willingly—then went to Catholic high school and college before largely stopping my regular church attendance as an adult.

Finally, I was initially surprised when I saw 14 percent of respondents had experience serving in the military that the number was lower than I expected it to be. Upon further research, though, those in the AV industry demographics have a much higher military representation than the general public, which makes sense.