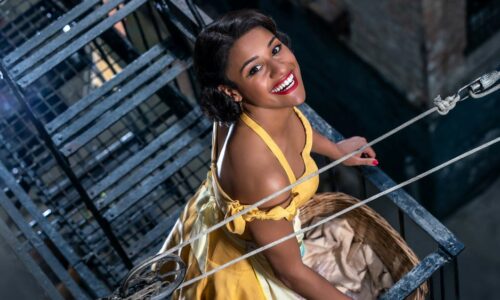 On the evening of December 15, I had the opportunity to join Shure and many of my media colleagues at IPIC Fulton Market in New York City for a screening of “West Side Story.” Following the screening, a Q&A with Tod A. Maitland, sound mixer for the film, took place. During the movie, the audience watched with rapt attention, transported by the ill-fated love story of Tony and María, and enjoying the flawless audio capture that the company’s technology was essential to achieving. After the applause died down, Shure’s Dan Hoeye initiated a discussion with Maitland that spanned everything from whether the actors sang live, to how he ensured voice volumes matched actors’ proximity to the camera, to what it was like working with Steven Spielberg, director of the film.

‘West Side Story’: Live and Prerecorded

Maitland revealed that, for “West Side Story,” the filmmakers opted for a mix of live vocals—vocals captured during the filming of the scene—and playback vocals, a term that refers to studio-captured audio that’s played back during the filming. For smaller, more intimate scenes, such as the wedding sequence, featuring the song “One Hand, One Heart,” actors like Ansel Elgort and Rachel Zegler sang live. To achieve the correct voice volume for the scene blocking and camera location, Maitland and his team used a combination of boom mics and wireless mics to capture audio. The team’s choice was Shure Axient Digital.

During the Q&A, Maitland acknowledged that actors usually hate wearing mic packs. One common complaint is that batteries can become hot; another is that wireless mics can be difficult to conceal and otherwise place properly. Maitland described Axient Digital, however, as being lightweight, durable and resistant to heat. Ergonomically designed, the transmitters are rounded on the edges. This made them more actor-friendly. What’s more, according to Maitland, the Shure mics delivered such an “open” sound that they could be positioned closer to the actors’ mouths. That was a big plus.

For other scenes, such as the early, gymnasium-set dancing scene with both the Jets and the Sharks, the vocals you hear in the film are prerecorded. During the filming of the scene, the actors danced live as the music played back throughout the New York City-based movie set. Given the ubiquitous audio playback, it was nearly impossible for the filmmakers to capture any ambient sound the actors were generating. So, Maitland explained during the Q&A, the actors repeated the entire scene later—with no audio playback—just to capture the ambient sound for the scene. For that, they were equipped with about 50 wireless headsets and earpieces. Shure’s PSM in-ear personal monitors were the technology of choice for “West Side Story.”

Why Shure Won Out

Asked for further insight on why Shure won out over other options, Maitland cited the RF nightmare that New York City is. He praised the helpfulness of Wireless Workbench (WWB), device-management and frequency-coordination software. WWB helps find usable frequencies and facilitates seamless changeover when a frequency is no longer usable.

Maitland, who has worked on 11 music-based films, also underscored his key ethos in approaching sound mixing and design for productions like “West Side Story”—namely, to make them sound as live as possible and to make them seem real. For this production, with the legendary Steven Spielberg at the helm, Shure was just the ticket to achieve those objectives.

Maitland explicitly praised the professionalism of a Spielberg set. He said, “When you work on a film like this, it’s not about fun: It is about professionalism. And this was the most professional film I’ve worked on.”

Kudos all around to making this reimagining of “West Side Story” something worth going to the movies for.

To read previous Commercial Integrator coverage of Shure, check out our archives.