We recently asked a small but diverse group of pro AV integrators from across North America some industry-specific questions — and the first inquiry was whether or not they’re sending someone to ISE 2018 (Integrated Systems Europe) in Amsterdam.

After all, it’s the industry’s largest trade show; it consistently breaks attendance records; and, coincidentally, it is coming up in just about a week.

But many of our respondents said they aren’t even planning on sending one employee to the show this year. In fact, more integrators in this survey aren’t going compared to those who are… and their reasons for this are pretty uniform. 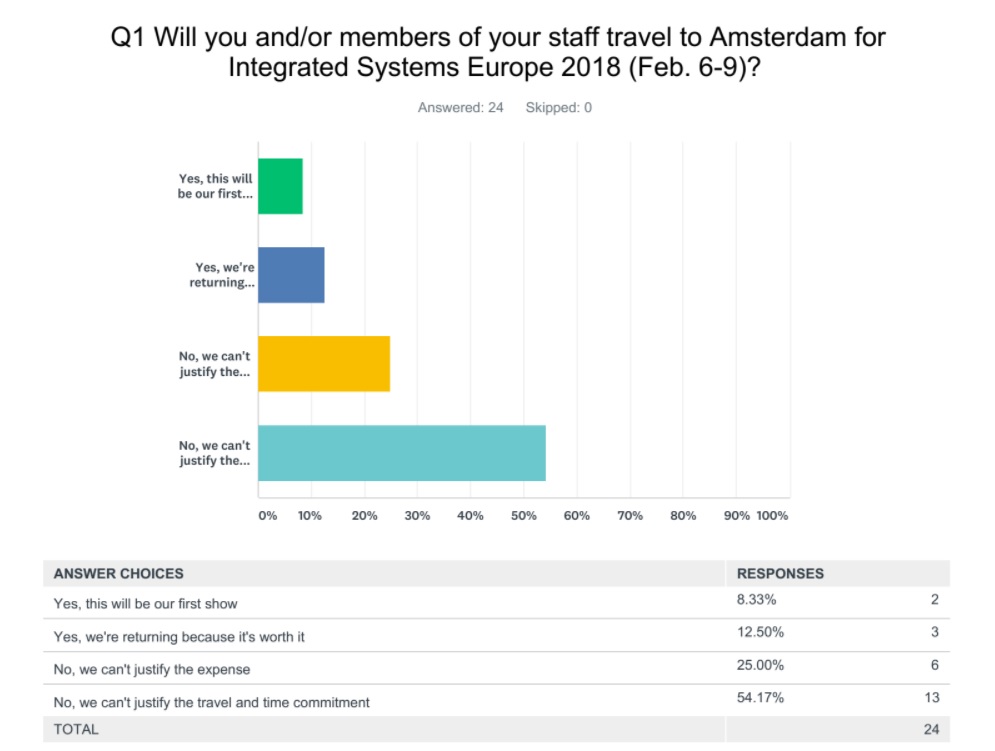 We gave respondents the ability to expand on their answer with a sort of “please explain” option. Some of the resulting explanations cited monetary expense as the prevailing reason for forgoing the industry’s largest trade show:

“It’s too expensive for flight/hotels to go to Europe from Texas. With InfoComm 18 in Vegas, and with NSCA BLC here in Dallas, we have no need to spend that much money for similar returns” — wrote one survey participant.

“We understand a lot happens in Amsterdam, but our market is in the US and we can’t justify the expense” — said another.

Related: Getting Around at ISE: How to Make the Most of Your Integrated Systems Europe 2018 Experience

One respondent was a bit more firm in their stance, saying ISE 2018 is “not worth the money, time, or effort.”

Expense is a perfectly legitimate reason not to attend a trade show, though many integrators have in recent times found economic footing in bringing their clients to shows as impetus for both business and building trust.

Overall, most of the participants who aren’t going did express some kind of interest in Integrated Systems Europe itself:

“It’s actually both C and D, costs and time/travel although I do hope to attend in the near future.”

“Our SVP of Project Design & Integration is unable to attend this year.”

“We are currently over at the BETT show in the UK – can’t do both.”

Finally, two separate commenters said that their target markets do not include Europe. ISE positions itself as a “global” show, not just a European one; but that can’t always sway a growing business to book hotels, fly over the Atlantic and pay for a week’s food.

Why Some North American Integrators ARE Going to ISE 2018

While roughly 79% of those surveyed said they aren’t going to Amsterdam this year, the remaining answered with great excitement for the show.

One company commented that they’ve attended for 10 years — two others will join them as repeat visitors.

Our survey’s smallest demographic by far were those who will attend ISE for the first time this year: only 2 people out of 24 gave that response.

These results pretty closely mirror another piece of Commercial Integrator research, which found that nearly a quarter of our audience of mostly North America-based AV integrators and consultants plan on attending ISE.

AVIXA points out that North America represents only a small portion of the global AV market. As such, American and Canadian integration have sought to create a global business strategy. Attending the show seems to be a key part of many of those strategies.