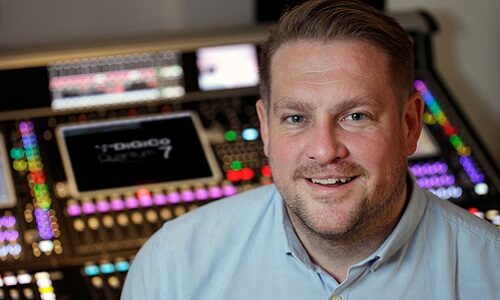 Freshwater, the general manager since 2017, takes the reins from Gordon, who has served in the role for 14 years.

During the pandemic, Freshwater impressed company leadership with his outreach to customers and partners, keeping them engaged despite the impact to the live events industry, according to Audiotonix, which also owns Allen & Heath, Calrec, DiGiGrid, Group One Limited, KLANG:technologies, Solid State Logic, and newly-acquired Sound Devices LLC.

“His performance and behavior over the last 18 months have been nothing short of phenomenal,” Gordon said in a statement. “He’s done an amazing job in a company that, to be very honest, is used to winning all of the time. Pandemic aside, he’s always been the right guy for the job.”

According to Gordon, the transition comes at a perfect time as he was “getting pulled everywhere” in the company.

“If we hadn’t filled the position at DiGiCo and put Austin on the path that we did, when we did, we were in danger of not being as great as the company deserves,” Gordon said. ”Finding the key person, certainly for (Chief Operating Officer Helen Culleton) and I, was such a crucial thing. People love DiGiCo for a reason, and we had to keep the same culture running throughout the company.”

According to Freshwater, he and his team kept in touch with customers to let them know the company was there to support them. The first six months were particularly challenging.

“Just checking in on everyone regularly and letting them know we were still around was vital,” Freshwater said in a statement. “It’s been a challenging time, both emotionally and commercially.”