As New Era Technology continues to grow, one thing remains, no matter how big it gets and how many people join the company as employee: its commitment to helping people in the communities where they live and work.

While the company now supports several charitable organizations—ranging from local hospitals to food pantries to efforts aimed at improving the lives of underprivileged people and much more—the key to those efforts at this point is their local roots and their genesis from New Era’s various offices.

“As our corporate culture grows, I imagine there will be corporate initiatives that connect some of these initiatives,” says Mike Harmon, U.S. VP of sales for New Era Technology. “I believe we need to keep our local initiatives too.

“We’re a high-touch industry, so it may feel a little disconnected if you’re doing it from a corporate level,” he says.

New Era’s many offices have “a common thread” of philanthropy, says Harmon, and the companies in the family have “a long history of giving back to communities they serve.”

In nearly four years, over 120 pieces of art have been displayed at the New Era-PA office to help support the local art community.

A Rundown of New Era’s Philanthropy

Among the many efforts under the New Era umbrella of philanthropy are attending and working on the annual Peyton Manning Children’s Hospital gala in Indianapolis, helping Vincent Village in Fort Wayne, Ind., with its efforts for homeless families and St. Vincent de Paul Christmas Together in Cincinnati. 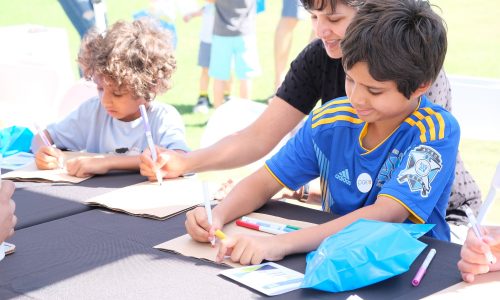 New Era’s Pennsylvania office supports local artists by housing their artwork and selling the pieces to guests, while the Columbus, Ohio, location hosts an annual golf tournament in memory of the founder’s daughter that’s raised more than $100,000 for Ohio University, her alma mater.

New Era’s Indianapolis office also has raised about $14,000 in the last five years for area food banks through fundraising raffles that’s translated into 40,000 meals in that time.

That office also connects with Rebuilding Together Indianapolis to improve local homes in disrepair.

“Seeing the joy on someone’s face after all the work people have put in, that just warms my heart,” says Harmon. “You really get to know these people, makes it a really great experience for everybody.

“It starts with the leadership at the top. One common thing across all these companies is the types of people who make them up. All these people have been dedicated to their individual companies and now to New Era Technology but they’re all woven around a thread that they love to help people,” he says.

Harmon thinks helping others is at the root of the AV industry—and he could be on to something based on how many Connected to the Community stories we’ve told so far and will continue to tell in the coming weeks and months.

“The technology we bring out is all about helping people or experiencing things better,” he says. “It’s kind of in our DNA to give back. It’s part of our core values, something our founding fathers embedded in us. I personally enjoy helping people do better in their careers.

“If our people feel strongly about something and willing to put their time and energy into it, we’ll definitely consider becoming more involved. It’s just within our nature. It’s just how we’re made. We want to be able to give back when we can and how we can,” says Harmon.