Solutions360: Software Gives You Visibility to Your Business

It’s not exactly a secret that employers are increasingly relying on contractors and other part-time AV labor to efficiently scale their businesses up – and down – as needed.

That shift away from hiring full-time employees is happening in a wide variety of industries, from manufacturing to tech to telecom, but perhaps nowhere does it make more sense than in project-based industries like IT and AV integration.

Simply put, employees cost more than contractors. There are the obvious expenses, like health insurance and paid time off. But there are hidden expenses that are hard to quantify, including the drain on internal resources that comes with hiring, training and managing full-time employees.

“Many companies don’t consider the cost of actually hiring and training a new employee,” Bianchet says.

“While trying to find really talented people, you may need to hire an outside agency to help in your search which adds to your new hire expense. On the other hand, if you hire someone less experienced, you may spend six months getting them up to speed. These costs are often overlooked.”

Recruiters typically cost three months of the employee’s annual salary, which means someone you hire at $60,000 will cost you an extra $12,000 on top of that, says Rick Hirsh, the founder of consulting firm Reclinata Group.

If you don’t go for a recruiter but want to simply post to a job board for AV labor, you have to maintain that subscription for an extended period of time, and then you have to apply the resources to vetting applications and pre-screening applicants – as opposed to using a recruiter, who is ideally bringing you only the best candidates who have already been vetted. 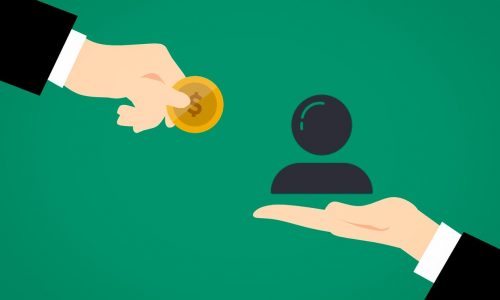 Related: Hiring? Prioritize These Essential Freelance AV Technician Traits Over Everything Else

Even then, though, you still need to take the time to interview all of the AV labor applicants a recruiter brings you.

“If you’re an operations manager, an integrator, and somebody puts five resumes in front of you and they all look reasonably qualified, there are real hours there in trying to determine who the right fit is,” Hirsh says.

On the other hand, Hirsh says, using a firm like Herman Integration Services to supply specific talent needed for specific projects, the integration firm puts their trust in Herman to do the full vetting and selection process, and the company expends no internal resources on that selection process.

And the more employees a company hires, the more AV labor management resources they need.

“As you expand the business and hire additional technicians, you’re either hiring more AV labor management to oversee the team, or you’re spreading a manager so thin that they’re not an effective manager,” Bianchet says.

“This cost is either monetary to your company or detrimental to the staff as they’re not getting the attention and help they need to be productive employees. Either way there is a cost.”

Perhaps the greatest savings in using contractors over full-time employees comes in getting closer to what Herman Integration Services describes as the economist’s ideal of getting 100-percent utilization out of a resource – in this case, out of a worker.

Full-time AV labor employees get paid when they’re working, and when they’re not – like when there’s a lull in business. Full-time employees drive to work sites, take lunch breaks, drive back to the shop and drop off materials and vehicles – and they take holidays and vacations, that employers pay for. 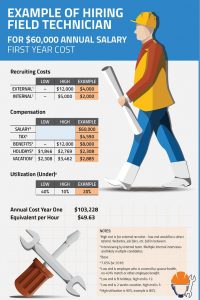 Depending on the agreement, contractors may or may not bill travel time to and from a job, and their billable hours cut much closer to the actual amount of time spent solely on the actual work they’re doing.

You don’t pay contractors when there’s a lull in business – and, again, you don’t pay them during holidays or personal vacations.

“Once you decide that you are going to deal with less than 100-percent utilization, that becomes the denominator of your cost. Your $60K guy who’s two-thirds utilized becomes the $90K guy,” Hirsh says.

“Now what integrators would like to tell themselves is their utilization rate’s are always going to be higher than that because it’s always sunny. It’s never going to rain. It’s just not the way it works.”

Hirsh remembers one particularly rainy time when the dotcom bubble burst in the early 2000s – companies who had added lots of full-time employees during good times were left reeling.

“[P]eople suddenly understood what having a bench really meant and that the idea of having lots of your own resources, lots of your own talent sitting inside your organization that always seemed like it was a value-add suddenly turned into a risk,” he says.

“The market pivoted, and those people who sat in [a] large amount of labor had to go back and rethink it.”

That kind of rethinking usually involves layoffs, Herman Integration Services says, which is bad, obviously, for the employees who will no longer have jobs, but it’s also bad for the companies, who save on expenses but take a reputational hit.

“If your company is perceived as one that is hiring and firing all the time based on project load, that word gets around, making it difficult to attract good talent,” Bianchet says. “It’s not a healthy culture for any company to have.”

These are tough decisions for firms to make, particularly in a small industry that relies so often on interpersonal relationships. But once a company decides to move toward utilizing contracted AV labor over employees, Hirsh says, they’re seeing the benefits to their bottom lines.