Kelsey Falk has heard all the stereotypes about millennials in the workforce: how they expect to be given things they don’t deserve, praised incessantly and giving perks others in the company don’t get. She despises these stereotypes, and works hard to prove she’s not the “typical Millennial” at SVT.

Falk, 25, was recently promoted from senior project manager to channel account manager at Brighton, Mich.-based SVT and she’s already thinking about what her future holds, from a promotion to director within three to five years and a possible role as VP of sales and marketing within the next decade. 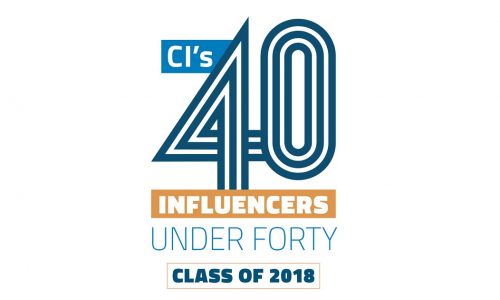 Related: Rising Stars in the AV Industry: The 2018 CI 40 Influencers Under 40

Unlike many perceived job-hoppers within her generation, Falk has no interest in or desire to move from company to company, especially since her mentor, Tina Peters, was recently promoted to VP of operations at SVT.

“There are people my age who feel they deserve to walk into a position without having to work for it, but you’re going to find those people in any generation,” says Falk. “They’re pretty easy to spot in how they answer a question or a look they give.

“A lot of my job as a project manager was going to construction sites, and I’ve been blown off by general contractors [because of my age].

“You have to prove you know what you’re doing and have control of the situation, even when you don’t sometimes. As soon as you prove you deserve a seat at the table, most people have no issue giving it to you.”

Falk stumbled into being the author of “A Simple Guide to Millennials in the Workplace,” a post she originally had intended to be a blog post about why she loves working at SVT. As she crafted the piece, she realized many of her peers didn’t love their jobs and she tried to summarize why.

She broke the reasons down into leadership, flexibility, the anti-dress code, incentives and work-life balance. 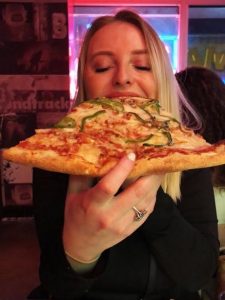 Kelsey Falk of SVT is also a pizza fanatic

“I realized a lot of the things I love about my job are things my parents, aunts and uncles don’t care about as much as my generation does,” says Falk.

One reason Flak loves her job is it gives her the chance to indulge in two of her favorite hobbies: traveling and trying new foods. She’s become a bit of a social media hit for her pursuit of the perfect slice of pizza.

She says it started as a bit of a joke among her friends but has become an important part of every time she visits a new city. While most laud New York City and Chicago for their pies, Falk is partial to Boston, Denver and Nashville.

Commercial Integrator: How did you get into the AV industry? Was it a career you always planned to pursue?

Kelsey Falk: I kind of fell into AV. I had a part-time summer job out of college as box office supervisor for an outdoor venue in metro Detroit.

The GM knew someone hiring a project coordinator at a tech company that was about an hour away. I knew project management really interested me and I got an offer three hours after my interview. I wasn’t 100 percent sure what to expect, but I loved learning everything I was every day.

I did internships in college at three PR and marketing firms, but realized it wasn’t a career path I wanted to take. I knew I couldn’t spend the next 30 years of my life doing that. Once I started working in AV, the interest started to develop. The more I learned about it, the more I wanted to learn.

CI: What about AV captivated you?

KF: The first projects I handled when I started working in the industry were interactive video walls. I’d played with them in stores and in a few demos, but seeing the back end on how they came to life, I was hooked. You really don’t understand until you see it being built. I wanted to know as much as I could.

CI: What do you like most about your work?

KF: If you raise your hand and say you want to learn more about anything, they’re 100 percent supportive. It comes down to how you learn best. Tina Peters has shown me exactly the type of leader I want to be, what I want to be and what I don’t want to be.

I’m trusted by the leaders and executives of the country that I’m getting my work done, even when I’m traveling somewhere or when I work at home. It’s about being empowered and trusted by your leaders.

I’ve never felt I’m being micromanaged. As long as I’m getting my work done, there’s no issue. I’m given the flexibility and tools I need to succeed from anywhere.