A septuagenarian is a person from 70 to 79 years of age. Count me in folks! With more than 7 decades under my belt and nearly 40 years in the commercial AV industry, I don’t claim to have seen it all, but I do claim to have seen a lot. I have lived through the era of stand-alone AV and have been on the forefront (and written too many articles) on the convergence of AV and IT. So, from a septuagenarian perspective, what is the next phase in our audio visual business evolution?

Even though I dislike buzz words, the next phase in our commercial AV business and personal lives is the internet of things (IoT).

This technological umbrella represents a quantum leap forward in communication gathering and data sharing compared to what resides in most traditional local area networks.

As a concept, IoT is all about connectivity and throughput. One subject matter expert told me that “the new rule for the future is going to be, anything that can be connected, will be connected. Simply put, this is the concept of basically connecting any device with an on and off switch to the Internet (and/or to each other).”

The analyst firm Gartner says that by the end of 2020, there will be over 26 billion connected devices and trillions of dollars spent.

They point out that “the IoT is a giant network of connected “things” (which also includes people). The relationship will be between people-people, people-things, and things-things.”

In a Forbes article they state that IoT makes once “dumb” devices “smarter” by giving them the ability to send data over the internet and allowing the device to communicate with people and other IoT-enabled things. See, I told you it was all about connectivity, but it is the impact of things on people that will make the difference.

For those who might want a Cliffs Notes version, IoT fundamentally works as follows:

This adds a level of digital intelligence to devices enabling them to communicate real-time data without a human being involved, effectively merging the digital and physical worlds. It is then up to the users how to manage what has come to be known as big data. For us in commercial A/V the opportunities are endless.

What are the tangible benefits of the IoT for commercial AV business?

The benefits depend on a particular business and their implementation, but the key is that enterprises should have access to more data about their own products and their own internal systems, and a greater ability to make changes and respond as a result. 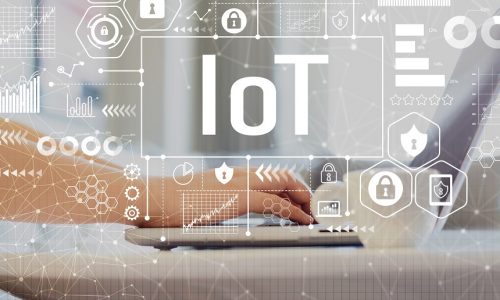 Related: 39 Flexible IoT Products for Embracing the Internet of Things

The consulting firm McKinsey reports that “With the introduction of comprehensive, real-time data collection and analysis, systems can become dramatically more responsive.”

I would add to this the word productive and herein lies the benefit for commercial AV business.

Increasingly we are seeing devices with sensors built into them. This represents the collection capability, but it is the expansion of broadband internet that makes access to all that data more widely available and useable. This is where Wi-Fi 6 and 5G come into play.

With the coming of Wi-Fi 6 in mid to late 2019, wireless connectivity is about to get faster.

Experts claim that Wi-Fi 6 will offer speeds that are roughly 30% faster than Wi-Fi 5, with theoretical maximum transfer speeds up around 10 Gbps.

But speed is not the big part of the story especially relating to IoT.

Wi-Fi 6 is all about improving the network when a bunch of devices are connected. Your router can only communicate with so many devices at once. The more that are added to the network (i.e. increased demand) the more the Wi-Fi network overall is going to slow down.

As IoT expands, current routers will get overwhelmed by requests from a multitude of devices as they get added to the network. Wi-Fi 6 routers are designed to more effectively keep all those devices up to date with the data they need.

Wi-Fi 6 introduces some new technologies to help mitigate the issues that come with putting dozens of Wi-Fi devices on a single network. It lets routers communicate with more devices at once, lets routers send data to multiple devices in the same broadcast, and lets Wi-Fi devices schedule check-ins with the router.

Together, those features should keep connections strong even as more and more devices start demanding data. IoT here we come.

The other hot topic in wireless connectivity is 5G cellular.

This is the latest iteration of cellular, engineered to greatly increase the speed and responsiveness of wireless networks.

5G brings three new aspects to the commercial AV table: greater speed (to move more data), lower latency (to be more responsive), and the ability to connect a lot more devices at once (for sensors and smart devices).

With 5G, data transmitted over wireless broadband connections could travel at rates as high as 20 Gbps exceeding wireline network speeds — as well as offer latency of 1 millisecond or lower for uses that require real-time feedback.

5G will also enable a sharp increase in the amount of data transmitted over wireless systems due to more available bandwidth and advanced antenna technology.

5G networks and services will be deployed in stages over the next several years to accommodate the increasing reliance on mobile and internet-enabled devices. Overall, 5G is expected to generate a variety of new applications, uses and business cases as the technology is rolled out.

There’s a lot of talk about 5G as a consumer technology but less about how it’s set to benefit businesses. To start with, it will certainly improve the experience of remote working and collaboration.

Today, over 50 percent of staff work away from their main office at least 2.5 days a week which while giving businesses agility, improved scheduling and lower staff turnover, can make connecting, sharing and engaging teams difficult.

Enter 5G. Network-related tasks, such as sharing large files in the cloud will become faster and more efficient, even on mobile devices without the need to connect to Wi-Fi, giving businesses huge productivity gains and boosting staff morale. After all, there’s nothing more frustrating than a slow internet connection.

Read Next: The New Law Affecting AV Manufacturers and the Industry at Large

As well as connecting people, 5G will connect things, vastly expanding the capabilities and application of IoT which demands better and faster connectivity.

As one expert notes, “5G will enable device-to-device communications for up to a million devices per square kilometer.” This opens-up huge opportunities for IoT innovation and commercial use giving commercial AV businesses at the forefront of creating and using such technologies a competitive edge.

The expansion of IoT capable devices is expanding by the month. The ability to connect devices without downsides is on the horizon. The cost of connecting is decreasing.

More devices are being created with Wi-Fi capabilities and sensors built into them and mobile device use with 5G will sky-rocket. All of these things are creating a “perfect storm” for the IoT.

As we said in the beginning, anything that can be connected will be connected. The task ahead will be managing all the data at our disposal and doing something proactive with it to the improvement of our lives, both in terms of commercial AV business and personally.