Steve Somers was among several AVIXA 2019 award winners celebrated during a ceremony at InfoComm 2019 at Center Stage, but he likely boasts two distinctions over his fellow honorees.

He’s likely the only 2019 AVIXA award winner who hasn’t changed jobs in the past 30 years—and certainly the only one who’s retired, meaning he went out on top with the Mackey Barron Distinguished Achievement Award, named for the HB Communications founder shortly after his death in 2015.

Somers, who retired April 1 after 30 years as VP of engineering at Extron Electronics from 1989 to 2019 as the holder of six patents related to AV solutions. He also helped to popularize the InfoComm Shootout.

“I joined Extron in 1989 and never got a promotion,” says Somers with a laugh. “When I started, I knew it was a risk. It’s been very satisfying to see it come along as it has.

“In whatever I was doing, I was always interested in doing the best that I could do. I always just really enjoyed what I was doing. This has been a really incredible industry to be in. I often joke about the gravitational pull. Once you’re in, you’re in,” he says.

Lee Dodson, who was part of the InfoComm Shootout Committee during Somers’ time on the panel from 1992 to 2001, has known Somers since the mid-1990s and worked with him for 10 years at Extron after 12 years with Sony, nominated Somers for this year’s honor.

Somers was chairman of the InfoComm Shootout Committee from 1997 to 2001 and supported the effort in Europe and Asia, in addition to in the U.S., and the 2009 InfoComm volunteer of the year.

“Steve’s tireless energy and dedication to the quality, integrity and industry support of the marquee element of the InfoComm tradeshow have been pivotal to the tremendous success of the event and the association,” says Dodson.

“Throughout Steve’s career, he has been at the center of activities that have become pillars of AVIXA, including education, standards and respected comparison tools,” he says. He praises Somers for “his thoughtful insight, cheery demeanor, entertaining sense of humor and above all, love for the industry.”

Somers, 70, joined Extron when there were about 30 employees and worked directly for founder Andrew Edwards. He came to Extron after 15 years in the display industry, including time at RCA in what he calls “the heyday of TV.”

He then worked at Conrac, which sold Class 1 broadcast monitors, and Datatape, where he developed “a great appreciation for tape recording.”

One of Somers’ friends recruited him to Extron in the late 1980s when the company was still largely focused on video components rather than control systems. Throughout his three decades at the company, one thing remained the same.

“When you’re in engineering, it’s always about what’s the best thing to do, not about the cost,” says Somers. “That philosophy has pervaded the company.”

Somers is “still getting used to” being retired, saying it “initially felt like a long weekend.” Even now, “every now and then, I get a little twinge about having to go back to the office, but I don’t have to do that anymore.” 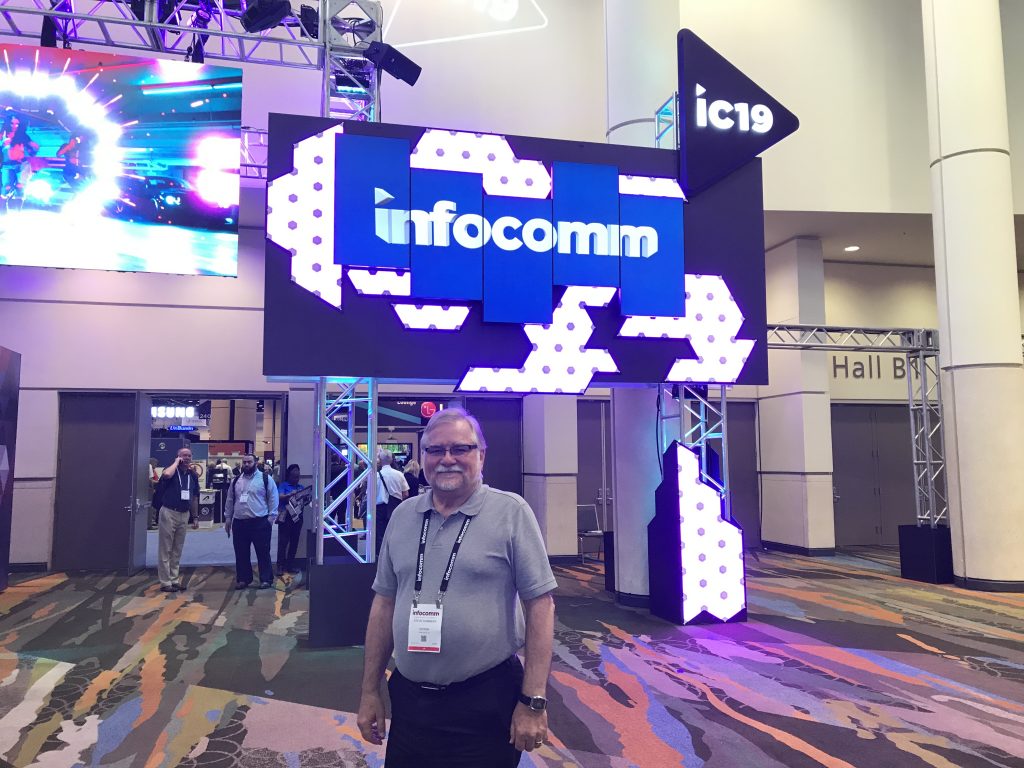 These days, Somers is focused on perfecting the photography hobby he launched at age 16. His hobby went dormant in college but was renewed about 20 years ago when digital photography “woke up my interest.”

Somers primarily focuses on landscapes in his photos and he loves visiting National Parks, especially on the west coast of the U.S.

“You always have to be up before dawn,” says Somers. “Once you get up and see the sun come over the rise, it’s well worth it.”

Somers who will be married to his wife Robin for 22 years in July, returned to InfoComm for the first time this year since 2011, when Extron moved on from the show to focus on its own regional trade shows.

“It’s invigorating to be back,” says Somers. “I’m really wooed by what we’re seeing in LED and laser projection. There’s no better time to be in AV than now.”

Somers says he was “astounded and very pleased” to earn this year’s Distinguished Achievement Award, calling it “a nice end cap on a career that’s been very rewarding to me. There are so many people who do so much. I didn’t know what I did had that much impact.”

Somers is proud to receive an award named for an industry pioneer.

“I am very honored to be considered in his company as a lifetime contributor,” says Somers. “This award has much more significance with his name and legacy attached to it. The outpouring of congratulations and kind references to my deserving the award have been amazing for me.”

One of Somers’ legacies is the creation and leadership of the InfoComm Shootout, in which a panel of industry insiders compared the latest products from a variety of manufacturers to help buyers make better decisions.

“The knowledge, guidance and integrity Steve brought to every conflict and obstacle increased industry support and expanded the scope and scale of the shoot-out and consequently the tradeshow,” says Dodson.

“Under Steve’s leadership, the event grew…to become the defining event of the industry. The shootout continuously pushed the limits of the technology envelope and Steve was always there to facilitate success and reliability regardless of whose technology or products were involved,” he says.

The InfoComm Shootout “became so important to the industry that it changed the entire product introduction cycle and influenced which products succeeded or failed for the year,” says Dodson.

“The shootout’s success defined the focus of the trade show and brought clarity and integrity to the industry. The credibility of honest competition and fair comparison played a major role in justifying large-scale technology adoption across the industry spectrum,” says Dodson.

“Finding solutions for communication problems is what this industry is all about,” says Somers.

Through the end of his career, Somers wasn’t shy about learning from his co-workers.

“In my mind, the best way to keep up is through the people you work with,” he says. “Carrying their ideas forward creates a lot of loyalty.”