Biamp had never sold its popular and well-received Biamp Devio conferencing solution for huddle rooms through distribution. That changed, however, when the audio manufacturer inked a partnership with Almo Pro A/V prior to the kick-off of the distributor’s Almo E4 AV Tour. 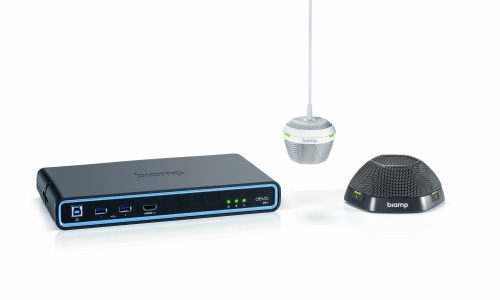 Related: Biamp Takes Collaboration and Whips It Good with Devio Launch
At the first stop of the 2018 Almo E4 AV Tour outside Washington, D.C., we talked to Almo Professional A/V executive VP Sam Taylor and Biamp sales development director for Eastern North America Michael Frank, because we were wondering what led up to the partnership.

We found that it had a lot to do with the popularity of huddle rooms as well as complementary needs.

Almo Pro A/V, for its part, has been looking to position itself as a one-stop shop for its dealers as they look to solve their customers’ huddle room needs. As Taylor points out, “Almo is proud to be Barco’s largest customer for the ClickShare which is deployed in hundreds and hundreds of thousands of rooms in the U.S. and throughout the world in huddle rooms.”

“We have never in the United States used distribution as a means to selling our platforms,” Biamp’s Michael Frank says. “We’re doing that now.”

“To have this now, we can offer a more complete solution to our integrators when they’re deploying huddle rooms,” Taylor says.

Forging a partnership to distribute Devio, however, required Biamp to break from tradition.

“We have never in the United States used distribution as a means to selling our platforms,” Frank says. “We’re doing that now.”

So why now and why Almo? “In many cases, there are customers who don’t buy direct from Biamp but then want to have this type of technology in the huddle space or a collaborative audio conferencing space and this is just a perfect opportunity for those customers to get those products.”

Read Next: Almo Flexes Audio Expertise with These 2 In-House Audiophiles

Frank adds that Biamp is “excited about [the] partnership with Almo.”

The Devio, he adds, isn’t just a huddle room solution. “It’s not only good for audio conferencing but video conferencing as well as in-room collaboration.”