It’s not because there are a lot of those folks. There’s not. There are only 12 AV professionals in the Diamond Club as of Crestron Masters 2019.

That’s partially because it takes at least 12 years to climb to Crestron Masters Diamond Level.

However, those elite Diamond Level members spend a lot of time on stage, sharing their knowledge and engaging with all Crestron Masters attendees.

That’s part of the deal when you’re a Crestron Masters Diamond Level member – you have to give back.

The event that became Crestron Masters was launched in 1998 and named accordingly in 2001.

It didn’t take long before Crestron recognized that the Masters program needed to be more than just a continuing education course, says Rich Sasson, director, global customer experience, Crestron, who was instrumental in launching Crestron Masters. 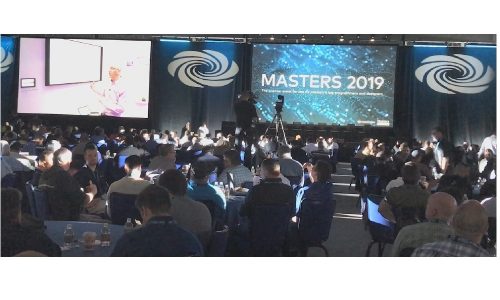 To reach that first level, silver, an AV professional would have to have attended three Crestron Masters programs (offered once annually in the U.S.) and pass an exam.

AV professionals are only eligible for Diamond Level after having attended 12 Crestron Masters programs. “Yes, people have been here that often,” Sasson jokes.

Then the rules change a little bit.

“At that point in time after becoming a diamond, your exam is to come here and teach, which is a pretty incredible thing to think about it,” Sasson says.

Giving back is part of the Crestron Masters deal, and that applies especially to Diamond Level members.

“These people are so invested and so wonderful that they come back to teach our industry,” Sasson says. “There are some phenomenal folks who are part of that elite diamond club.”