Minneapolis, Minn.-based Carousel Digital Signage continued to provide digital signage content delivery and management at the University of Connecticut (UConn). Recently, UConn upgraded its existing on-premise Carousel 7 system to Carousel Cloud. With this, it further simplified the creation, scheduling and management of messaging throughout its campus and regional locations.

Brien Woodaman, AV technician and digital signage service manager at UConn, explains that the university began standardizing its digital signage systems in 2016. At the time, each department used its own homegrown solution. This led to inconsistencies in service offerings, scalability, hosting and performance. “There was a lot of confusion, so there was a push to standardize,” he says.

To address the issues, UConn deployed Carousel 7, Carousel Digital Signage’s on-premise platform, to deliver content in a more streamlined fashion. This provided the standardization the university was seeking. It also addressed the need for a user-friendly UI. “The people interfacing with the digital signage systems weren’t graphic designers or technicians; they were office admins, faculty, or staff from different departments,” Woodaman adds. “We needed something that was simple and easy to use, and that’s why we chose Carousel.”

The initial Carousel 7 deployment involved 300 media players. Since then, UConn has kept expanding from there through its transition to Carousel Cloud, which began in 2021. Presently, there are approximately 700 displays receiving content from Carousel Cloud across the main campus, as well as six regional locations. Woodaman estimates that by the end of the summer, this number will increase to 800.

The university uses a combination of BrightSign and Apple TV players, as well as the webOS functionality that is built into its LG smart displays. Woodaman explains that UConn also deployed Jamf Now. This is a cloud-based MDM solution that manages all Apple TV devices on campus. Thanks to Carousel’s partnership with Jamf, Woodaman extended these management capabilities to the digital signage system. “I created a sub-group that manages the Apple TVs that are running signage,” he states. “When a new device is purchased, I just add that to the Jamf sub-group and push out the configuration, and it loads right into Carousel Cloud.” 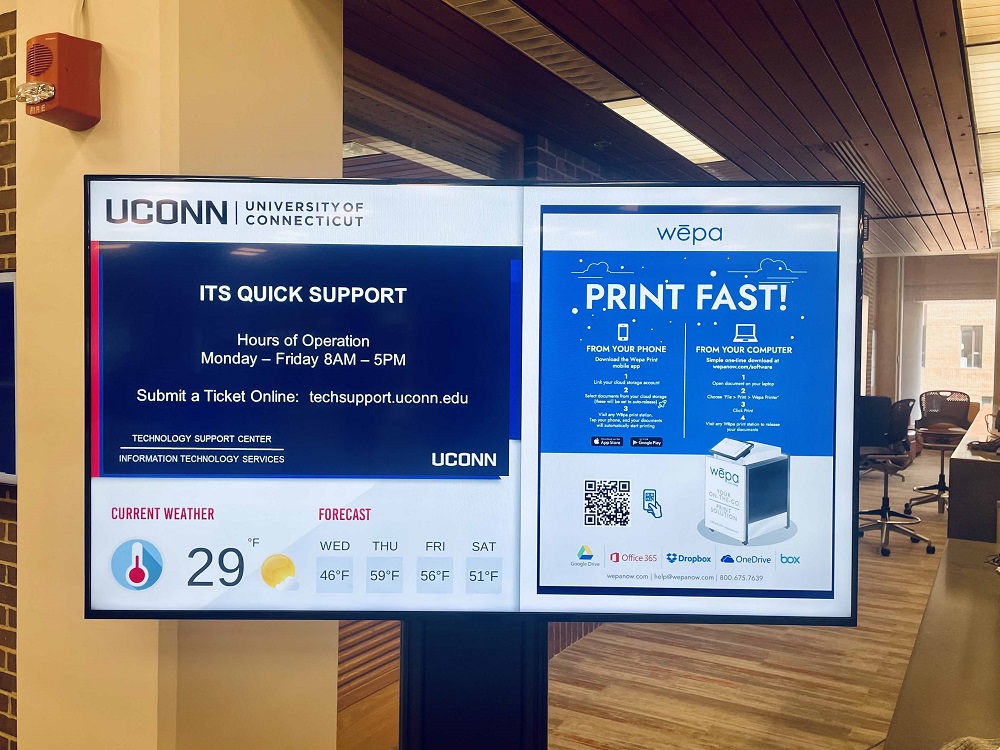 The content displayed across UConn varies depending on where the signage is situated. For instance, the screens outside of classrooms display scheduling information. Meanwhile, department-specific displays run announcements related to scholarships, internships and different work opportunities. Student groups also have access to some displays so that they may post advertising about upcoming events or even roommate seeking ads.

Carousel Cloud software also provides options to use built-in templates for digital signage or upload pre-made content. Additionally, the Carousel Cloud system integrates with the university’s mass notification system so that in the event of an emergency, the screens immediately switch to displaying alerts.

Furthermore, a portal on UConn’s website manages content created by students. It features a submission form asking users to provide information about file sizes and aspect ratios. It also requires information on buildings where they wish the content to appear and for how long. These completed forms generate tickets in the help desk system. From there, Woodaman’s team reviews these requests to ensure that they follow the university’s style guide. Individual departments that publish and manage their own content use Carousel Cloud’s scheduling feature to distribute messaging.

Woodaman notes that the shift to Carousel Cloud has resulted in a more intuitive, responsive user experience. He points out that updates are issued regularly, enabling users to take advantage of new features. The cloud solution also facilitates administration and management on the fly. “If I’m not in the office at my computer, it’s easy for me to pull out my phone and navigate the mobile version to check on players, update content, and add users,” he reveals. “It makes for a faster experience.”

The new shift also makes for more consistent branding. During the transition to Carousel Cloud, Woodaman worked with Carousel’s creative services team to develop three standard channel options with templates that incorporate the visual elements associated with the UConn brand. “Previously, it was kind of a free-for-all when it came to how people wanted their channels to look,” he said.

Even though different departments need to distribute their own messaging, there was a need for some visual consistency. Woodaman adds, “We wanted to make sure that it was more cohesive, and that you still knew that you were at UConn when looking at the displays. The channel templates are super helpful in keeping everything consistent, and people who don’t have graphic design skills can easily create content and publish it.”

Looking forward, Woodaman says UConn is considering the deployment of outdoor signage for wayfinding, as well as at bus stops to display schedules. “We’re planning for steady growth as more and more people on campus use the system,” he says. In addition to everyday, informative signage, there are opportunities to take it further using video walls and marquee wrap displays. “We have a few fun projects that we’re currently conceptualizing.”

UConn’s AV services group is now part of the university’s IT department, which facilitates rollouts such as these, Woodaman explains. “Because we all work under the same umbrella, it’s easier to gain access to IT resources and to collaborate with the server group and the security team,” he remarks. And, once again, moving to the cloud has increased efficiency. “With Carousel Cloud, once it’s set up and the initial paths are created, there’s virtually no ongoing maintenance thanks to its IT-friendly operation. Everything is seamless.”